You are here: Home / Senza categoria / Libyan army to recapture Tripoli from Islamists 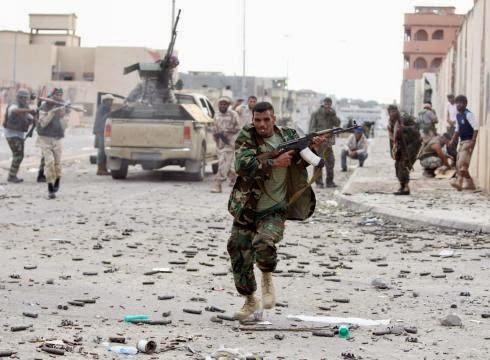 Libya’s national army said on Saturday that their forces are deployed on the outskirts of the capital Tripoli and are ready to “liberate” it within hours.

The army has entered the southern area of Tripoli near the international airport and will deal with the enemies inside, army Chief of Staff Maj. Gen. Abdel Razek Nazawra said during an interview with a private-owned TV Libya First.

Nazawra also called on the Libyans to rise up against the Tripoli occupants, the Islamist armed coalition Libya Dawn.

Some witnesses told Xinhua that warplanes of the army on Saturday morning bombed Tripoli’s Mitiga airport, the sole functioning air hub in the capital, hitting the runway and the airport highway.
Libya Dawn could not be reached for comments.

The capital city fell to the hands of Libya Dawn last August, when the internationally recognized Libyan government retreated to the eastern town of Tobruk. The army has been struggling to regain the lost territories since December.

Libya, a major oil producer in North Africa, has been witnessing a frayed political process after its former leader Muammar Gaddafi was toppled during the 2011 political turmoil.

The protracted conflict in Libya has caused a humanitarian crisis with at least 120,000 people forced to flee their homes, resulting in shortages in both food and medical supplies along with mounting casualties.

Although the United Nations has brokered several rounds of peace talks between the opposing parties since September, clashes remained despite a truce agreed on by factions.