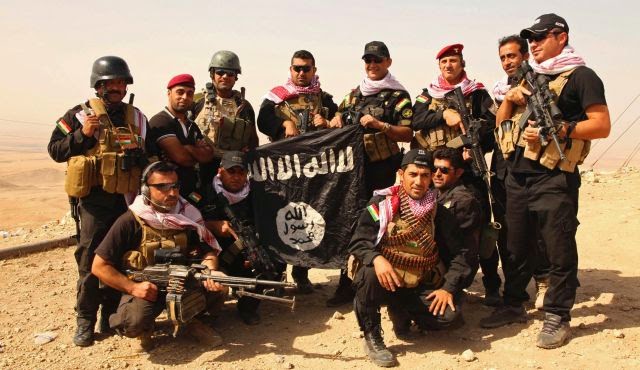 The Islamic State (IS) militants have retreated in number of the villages in Southern Kirkuk Province and Kurdish Peshmerga forces continue advancing in the area.
A source from Kirkuk told BasNews on Saturday, “IS has forced number of Arab tribal leaders in Hawija Town located in western Kirkuk to publicly show their support to IS in the center of the town.”
“IS tries its best to show Iraqi federal government that the Arab tribesin the area support IS militants and fight with them hand in hand. IS has threatened them that if they don’t support them, IS will take revenge,” said the source.
The source went on, “Peshmerga forces have freed 12 villages between Daquq and Duzkhurmatu road in southern Kirkuk. IS militants left the area without any fighting.”
“IS insurgents have planted IED bombs inside almost all houses in the villages and ran away to with most of them have moved to Hawija,” the source added.
Jihadists took control over those 12 villages, which were Bizurga, Tamoor, Albu Shahab, Tar, south and north Smags, Salam, Rayana, Tl Bisll, Albu Najm, Shalkha and Zgryana.
So far Bashir village in Taza Town still remain under control of IS, with most of the residents in that village are Turkmen. The village encompasses almost 1150 houses and more than 2500 families live in. The village is 25 kilometers away from the center of Kirkuk.