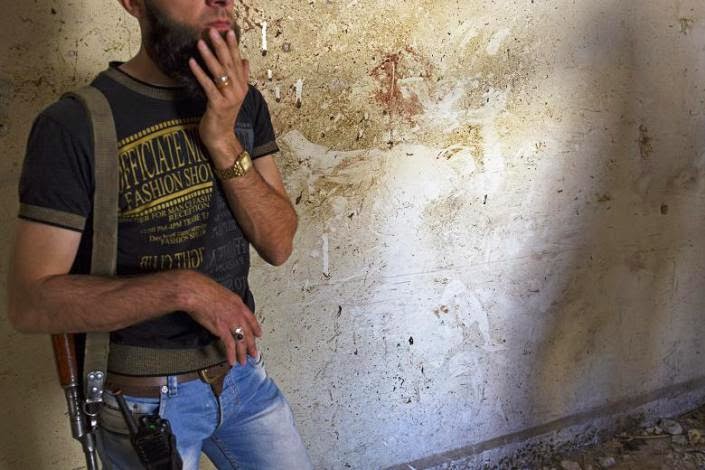 Lined up next to each other in front of the central mosque in the city of Misrata, ten coffins, two of them covered by the flag of the new Libya, marked the end of a long negotiation. “ISIS [The Islamic State] is on our doorstep and we will fight it with all means we have,” the imam screamed into the microphone in an anger-broken voice, looking at the wooden boxes holding the remains of the young fighters, all between the ages of 19 and 26. They were killed a few hours earlier in the village of Ben Jawad, outpost of Sharooq forces from Misrata, who were assigned to conquer the largest national oil terminal in Sidra.

“It was an ambush,” says Saddiq Ezzoid from Misrata. “Two terrorists from ISIS quartered in the village of Noufliya carrying a rocket-propelled grenade (RPG) on their shoulders opened fire on the boys at the checkpoint.” Misrata forces have been literally trapped in Ben Jawad for the last month, pinned down between the rival forces led by General Khalifa Haftar on one side and ISIS on the other.
Last December, Misrata, allied with the Tripoli-based National Congress which was reinstated after the Supreme Court invalidated the parliamentary elections held in June as illegitimate, launched the Sharooq operation, “English sunset,” to take control over the oil terminals controlled by federalist forces and General Haftar, lined up with the rival parliament sheltered in the far eastern town of Tubruq, which considers the Supreme court’s verdict invalid because it was allegedly handed down under duress.
“ISIS took advantage,” said a journalist from Misrata who declined to give his name for security reasons, “whereas our forces have been focused on the front Sidra terminal fight.”  In mid-February, hundreds of armed men marched into the city of Sirte, 150 miles east of Misrata, pledging loyalty to Abu Bakr Al Baghdadi’s Islamic State.
“ISIS men have been grouping there for months, but that day they openly came out,” a member of Misrata intelligence told The Media Line. The followers of the caliphate had slowly infiltrated the hometown of former Libyan strongman Muammar Qaddafi from the beginning of 2014, when the head of the Salafi group Ansar Al Sharia, Attir Ahmed, was killed in battle.
During the last three years Misrata turned a blind eye to the expansion of Ansar Al Sharia in Sirte, despite its popular hatred of its fundamentalist ideology. “The Salafi interpretation of the Holy Quran is absolutely against the use of force, except in cases of self-defense,” Mohamed, one of the young Misrati fighters on the front line, explained while pointing his gun toward Sirte. He said, “ISIS in Sirte has been supported by previous regime’s members. Foreign fighters from Tunisia, Algeria and Afghanistan are few, while hundreds of ISIS members from Sirte are Qaddafi followers acting as Islamic fundamentalists just to regain power.”
Sirte, the site of the last stand of the Qaddafi regime in 2011 and scene of the capture and his bloody death of the colonel, was completely destroyed in heavy fighting between loyalist forces and rebels, then by NATO bombings.
“We did not want Sirte go through what they suffered in 2011, and we first tried to negotiate with terrorists their way out,” said a Misrati businessman. His eyes became moist when he recalled the days of Revolution against Qaddafi forces, his gaze darkening as he stressed that, “I’m disgusted by politics and I stayed out of the following struggle for power, bleeding Libya for the last three years.”  Then, the man who boasts of his import-export company’s branches in several countries of Europe continued, “But ISIS is the red line, and today I go back to camp.”
While Brigade 166 from Misrata, assigned by the Tripoli-based chief-of-staff, took positions on the outskirts of Sirte to contain ISIS expansion in the area in February, a delegation from Misrata engaged a dialogue with the terrorists holed up in Sirte. “We asked them to lay down their arms and hand over foreign fighters”, one of the delegation’s members told The Media Line. “We offered the protection of the Libyan fighters and also a safe return to their hometowns like Derna.”
But in mid-March, the Islamic State’s fighters came out of buildings they had occupied and set up checkpoints in downtown Sirte and on the outskirts of the city, forcing the Misrata fighters to retreat to 10 miles west of the city.  In the first exchange of fire between rival forces 19 men were killed — 17 ISIS fighters and two men of Misrata.
The Brigade 166 then announced the start of the military operation against ISIS, urging civilians to leave the city. Only a few dozen families riding in overloaded cars passed by the Misrati checkpoint west of Sirte, where dozens of young fighters rushed to support of Misrata Brigade 166. “The time for dialogue is over,” said a member of the delegation. “Now the problem will be solved by force.”
The tension remains very high and the authorities have declared a night curfew. First, a car bomb exploded last week in the compound of Brigade 166 in Misrata, killing two men. Although the city boasts eighty-thousand fighters according to the local security sources, Misrata is engaged on several front lines across the country and its resources are diluted. In the west, a number of Misrati fighters participating the coalition Fajr Libya are deployed near the military airbase of Watiya against the forces of Zintan and their ally Haftar.  In the south, some belonging to the Third Force assigned to protect the oil fields are in the desert to oversee them.
East of Misrata, the situation for Sharooq forces is even worse as they count three frontlines in less than 120 miles.
Misrati fighters deployed in Ben Jawad are under threat of the federalists led by Ibrahim Jathran on the eastern side and ISIS combatants scattered between Noufliya and Sirte, while General Haftar’s aerial bombardments intimidate from above.
However, the killing of the ten boys in Ben Jawad has suddenly exhausted the patience of Misrata. “They might be ISIS fighters or Qaddafi regime followers, [but] they all slaughter people so they are terrorists. And we will kill them all,” declared a member of the security operation room in Misrata.