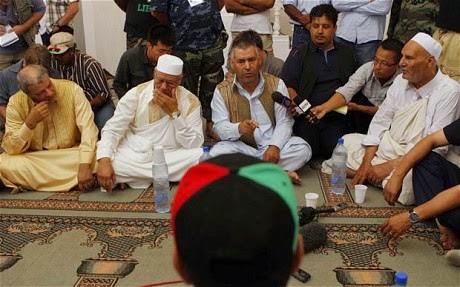 Libyan tribal leaders have said that although there is a necessity for dialogue it must be held inside Libya and that, contrary to UN plans, they will not meet outside the country.

The United Nations Support Mission in Libya (UNSMIL) has said that the a meeting of tribal leaders would be held in Egypt.

Over the past ten days a number of tribal figures have been firing warning shots across the bows of the UN plan to meet in Egypt.  On 12 March, one of the leaders of the Magharba tribe, Salah Al-Otiyush, came out firmly against a meeting abroad.  The tribes were planning to meet in Libya and that would be sufficient, he said.

A couple of days later, Mohamed Al-Mubashr, the Chairman of the Libya Council of Elders which comprises the country’s tribal leaders, also said his colleagues had discussed the UN invitation to go to Egypt but that they had rejected it. There would be no meeting there, he said.

While some leaders have insisted that it makes more sense to hold the dialogue at home because they are more comfortable there, others have expressed fear of added pressure, should they meet abroad.

“I refuse dialogue outside Libya because we will be pressured to accept agendas that we ordinarily would not agree to,” Chairman of the Shoura Council of Elders of Fezzan Abdul Salam Buhulaiga has said.

“Why wouldn’t we talk inside Libya? We are Libyans and we understand each other,” Buhulaiga added.
He and other have claimed that the meetings in Geneva, Morocco and Algeria have not been a success.

The meeting referred to by Otiyush, and which he implied would equivalent to what was being proposed by UNSMIL, took place in Tobruk this weekend and came out heavily in support of the House of Representatives (HoR).  However, it comprised tribes already supporting the HoR. These supporting Libya Dawn were not present.

Political meetings held inside the country involving all sides to the Libyan crisis are seen as impossible in the current climate.