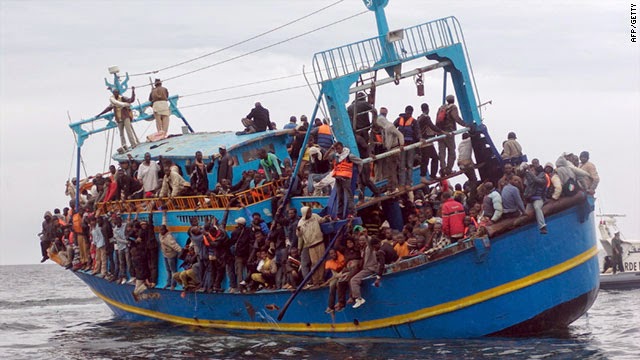 Italy wants Egypt and Tunisia to play a role in rescuing stricken migrant vessels in the Mediterranean, a government planning paper showed, so that survivors could be taken back to African instead of European ports.

The plan, which calls for the European Union to support the proposed Egyptian and Tunisian operations, was prepared by the Italian home affairs ministry and seen by Reuters.

It represents an attempt to stem the growing flow of people risking their lives to reach Europe, most of whom try to get to Italy, often on overcrowded or defective vessels.

Last April Italy rescued 4,000 migrants from boats trying to reach European shores in only 48 hours in a deepening immigration crisis that is being made worse by the turmoil in Libya, which has grappled with chaos and rampant militias since the ousting of Muammar Gaddafi in 2011.

In one of the worst such tragedies in October 2013, a boat carrying migrants from Libya to Italy sank off the Italian island of Lampedusa. The Italian Coast Guard managed to rescue 155 survivors but more than 360 migrants drowned.

Italy is already in bilateral talks on sea-rescue operations with Tunisia and Egypt, but joint diplomatic action of the EU is crucial to get them involved, the paper, said.

According to the plan, Tunisian and Egyptian naval units would intervene to rescue migrants in areas close to Libya, which is the main departing point for migrants bound for Europe, but has no effective control of its territorial waters because of the ongoing conflict between its warring factions.

Once the migrants are taken out of the sea by the Egyptians or the Tunisians, they could be taken to North African ports, the paper said.

The Tunisian and Egyptian operations should be carried out in cooperation with Italian and European authorities and be adequately financially and technically supported by the EU, Italy said.

Italy says that the number of migrants that arrived at its shores in the fist two months of 2015 was almost twice as big as in the same period of last year, when the Mare Nostrum operation was in place, the paper said.