You are here: Home / West Asia / 45 Afghan migrants died after being thrown into river by Iranian forces 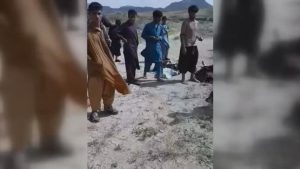 The latest reports suggests that 45 Afghan migrants lost their lives after a group of 57 peope were thrown into river by the Iranian border guards, like reported by khaama.com.

Habiburrahman Pidram, a lawmaker from the westerly Herat province, told Reuters “These workers were kept in custody by Iranian forces and, after 24 hours, the Afghan workers were brought to the bank of the river, beaten and ordered to jump in the river to go back to Afghanistan.”

Pidram further added “Of 57 workers who were forced into the river by Iranian security forces, only 12 managed to survive.”

Some of the Afghan migrants had earlier accused the Iranian forces, border guards, of throwing 57 people into a river which resulted in the killing of at least 23 of them.

Certain of the survivors of the incident claimed that the Iranian border guards initially arrested the migrants from a bordering region and later threw them in to Harirod River.

According to reports, the incident took place earlier this as the migrants were on their way to Iran, apparently for work opportunities.