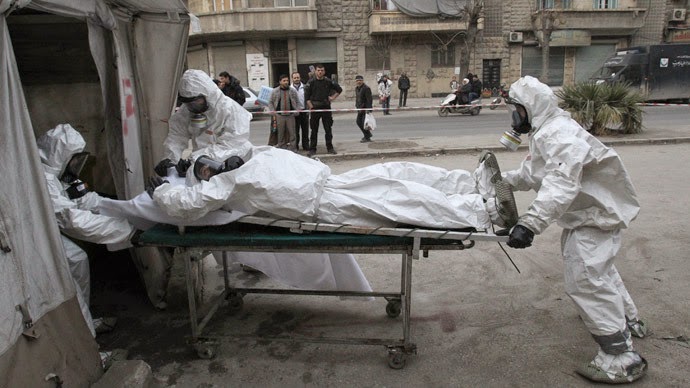 Isis militants returning to the UK could launch a chlorine gas attack on trains, the London Underground or at a football match, according to a chemical weapons expert.

Hamish de Bretton-Gordon, a former commanding officer at the Joint Chemical Biological Radiological Nuclear Regiment, said the last two weeks in Syria and Iraq have seen the “most concentrated and deadly use of chemical weapons” since the 1980s Iran-Iraq war.

“It is very evident that Isis are putting much time and effort into training its jihadis in the use of chlorine as a terror weapon and in particular in IEDs (improvised explosive devices),” he wrote on 2Paragraphs.

“Virtually every foreign jihadi who returns to the US or UK will have been exposed to training of this sort and will have a reasonable idea on how to use chlorine and other toxic chemicals as a terror weapon.
“In the UK at least, up to 90 tonnes of chlorine can be purchased without any licences required.”

After returning from advising security forces in Baghdad last week, he told the Daily Mirror he feared a chlorine gas attack was “highly likely”, adding: “This could happen on a train or tube or even at a big football match.”

Mr de Bretton-Gordon examined the likelihood of such an atrocity on the 20-year anniversary of the Tokyo subway sarin attack, which killed 12 people and injured more than 1,000 more, causing chaos in the Japanese capital.

The Aum Shinrikyo movement used packets of the nerve agent, which they punctured with umbrella tips on the Tokyo subway during morning rush hour.

But Mr de Bretton-Gordon said less complicated methods would be needed for a deadly chlorine attack.
“The method of delivery of chlorine at the second Battle of Ypres in April 1915, 100 years ago, would be effective on the subway today,” he wrote.

“That is, take the top off a chlorine canister and let is ‘vapourise’ aka ‘weaponise’.”

The expert, who has recently worked with UK-based charity Syria Relief advising civilians on what to do in a chlorine gas attack, founded chemical, biological, radiological and nuclear (CBRN) defence firm SecureBio and is a director at gas mask manufacturers Avon Protection.

His 23 years in the British Army included service as Commanding Officer of the UK’s CBRN Regiment and Nato’s Rapid Reaction CBRN Battalion.

Mr de Bretton-Gordon said that Isis had planted “hundreds” of chlorine IEDs in the defence of Tikrit and detonated chemical bombs north of Mosul against the Kurdish Peshmerga.

During the advance of the so-called Islamic State last year, militants gained control of a huge chlorine factory near Mosul as well as the Muthanna complex near Baghdad, where Saddam Hussein manufactured chemical weapons using mustard gas, sarin and VX.

The UN said 2,500 remaining rockets filled with nerve agents were degraded and could not be used to make working chemical weapons.

Mr de Bretton-Gordon said that even if returning Isis jihadists attempted to launch a chlorine attack in Britain, the effect “should be minimal” if security services are forewarned.

“Chlorine is not very toxic and the green and yellow clouds are easy to see and avoid, and it is very non-persistent only lasting for a few minutes,” he added.

“Undoubtedly, and hopefully, the CIA, FBI, MI 5 and 6 etc will be taking a very close look at returning jihadis and in particular anybody buying toxic chemicals.”

Iraqi Kurds also claim to have evidence that Isis used chemical weapons against their fighters in January this year.

The use of chlorine, a choking agent that dates back to the First World War, is banned under the 1997 Chemical Weapons Convention, which prohibits the use of toxic agents in warfare.

Chlorine and other chemical weapons have been used “systematically” in the ongoing civil war in Syria, according to monitors, who accuse all parties of atrocities.

Bashar al-Assad’s forces allegedly used sarin in the 2013 Ghouta chemical attack that killed hundreds of Syrian civilians outside of Damascus and have reportedly dropped chlorine barrel bombs in recent weeks.

Iraqi Kurds were victims of the deadliest chemical attack in recent history when Saddam Hussein’s air force bombed the town of Halabja, where up to 5,000 people were gassed to death in 1988.