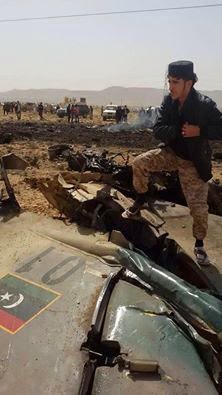 An official with Libya’s internationally recognized government says its soldiers have shot down a warplane flown by the rival, Tripoli-based government that’s allied with Islamist militias.

Official Mohammed al-Masri said the plane was downed Monday after it bombed Zintan, a mountainous western town supportive of the elected government. There was no immediate report of casualties.
Libya is split between rival governments and warring militias after its 2011 civil war and the death of dictator Moammar Gadhafi. It also faces the rise of an affiliate of the Islamic State group.
Meanwhile Monday, army spokesman Ahmed al-Mesmari said the elected government launched an airstrike targeting an Islamist militia in the city of Tarhouna. He said the strikes prompted retaliatory attacks that killed four civilians, including a woman whose hands were cut off.