You are here: Home / Senza categoria / Tajik IS militants threaten ‘Jihad’ at home (or even in the Kremlin) 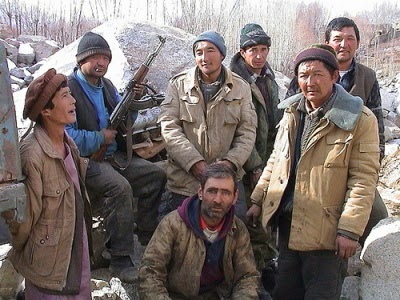 A group of Tajik militants who claim to be fighting with the Islamic State (IS) group in Syria has posted a new video in which it threatens to transfer its activities from the Middle East and fight in Tajikistan, RFE/RL’s Tajik Service, Radio Ozodi, has reported.

The 16-minute video was shared on the Russian-language Odnoklassniki social network on March 19 and shows a group of 16 masked militants, most of whom appear to be Tajiks. It is not possible to independently verify the date or the exact location in which the video was shot.

Tajikistan’s security authorities have yet to comment on the video, Radio Ozodi reported.

One masked militant said that the video was the militants’ final address from Syria and Iraq and that their next video could be filmed “from the mountains of Tavildara in central Tajikistan, or the Tajik capital, Dushanbe — or even from the Kremlin.”

One of the men in the video appears to be a notorious Tajik militant, known as Nusrat Nazarov or Abu Kholodi Kulobi, who says he is 38 years old and hails from the village of Charmagon in the Kulob district of Tajikistan. Nazarov claims to be now living in a suburb of Raqqa, an IS stronghold in Syria.

Nazarov addressed the Tajik government and pro-government religious leaders, saying that they would be “held accountable” for actions carried out against militants in the Central Asian state.

In a recent interview with Radio Ozodi, Nazarov said that his goal is to introduce Shari’ah law throughout the world, including among Native Americans.

Nazarov has also claimed that there are as many as 2,000 Tajiks fighting in IS, and that around 500 have been killed, figures that are almost certainly highly exaggerated.

The State Committee for the National Security of Tajikistan said in November that as many as 300 Tajiks have gone to join the fighting in Syria and Iraq. Edward Lemon from the U.K.’s University of Exeter, who researches and tracks Tajik militants in Iraq and Syria, has found evidence of over 60 documented Tajiks in Syria.

Would IS Send Its Tajiks To Fight In Tajikistan?
Nazarov’s boasts that he and his fellow IS militants will soon be fighting to impose their version of Shari’ah law in Tajikistan is also likely hyperbole.

There is no evidence that the IS leadership in Syria and Iraq is planning to send militants home to fight for the group.

A video released by Tajik IS militants in January explained that several Tajiks had asked permission from IS’s senior leadership to wage “jihad” in Tajikistan with the extremist group Jamaat Ansarullah, but had been refused.

The militant in that video, who gave his nom de guerre as Abu Umariyon, said that IS commander Abu Bakr al-Baghdadi told the Tajik group that they would “have to wait.”

That the IS leadership is not keen to allow its militants to leave Syria and Iraq and fight elsewhere is not surprising. IS cannot afford to risk losing its rank-and-file militants as it faces ongoing military pressure and sustained losses in both Syria and Iraq.

In Syria, the militants have taken heavy losses from the U.S.-led coalition and Kurdish militias, while forces loyal to Syrian President Bashar al-Assad are also targeting IS militants. IS in Iraq is facing air strikes from the United States and its allies, as well as ground assaults and opposition from the Kurdish peshmerga and Iran-backed Shi’ite militias.

Central Intelligence Agency Director John Brennan said on March 21 that IS had been weakened in Iraq and Syria.

IS Is Expanding
Though IS is reluctant to allow its militants to leave for “jihad” elsewhere, as the group comes under increased military pressure in Syria and Iraq its leadership has welcomed the expansion of its influence into new parts of the world.

This month, IS accepted a pledge of allegiance from the Nigerian extremist group Boko Haram.
In another sign of the increasing military pressure IS is facing, the group has released a number of videos calling on Western Muslims to carry out attacks on their home soil — but only if they are unable to join IS in Syria and Iraq.

Indeed, CIA chief Brennan noted that — even though IS has been weakened in Syria and Iraq — the group’s reach is extending beyond Iraq and Syria and that it will take a combined and extended international effort over the next decade to repel the threat.