You are here: Home / Africa / Libya, attack on Corinthia Tripoli Hotel over, all ISIS terrorists killed 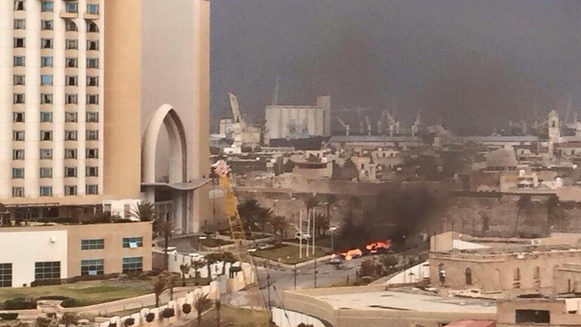 A partial take-over of the Corinthia Hotel Tripoli by a number of terrorists is now over, with all the terrorists having been killed by Libyan forces.

Prime Minister Joseph Muscat in a tweet said the government had been informed that the attack was over. He also said he will report about the attack in Parliament tomorrow, and Opposition leader Simon Busuttil has also been briefed about intelligence available to the government.

Informed sources said intelligence reports indicated the terrorist action was not an attack intended against Malta or the Corinthia itself.

The raid on the popular central Tripoli hotel took place just after 9am today when the terrorists set off a car bomb and stormed the lobby, killing three security guards in a firefight. They are then believed to have held a number of hostages on the 20th floor of the hotel.

According to unofficial reports five foreigners were also killed. Another three were injured.

A spokesman for the Corinthia group said all Maltese and all guests were safe.

Affiliates of Islamic State were said to have claimed responsibility in a tweet, saying they had occupied the hotel to kill diplomats.

However the Corinthia spokesman said no senior diplomats are known to have been staying at the hotel.
The ‘Isis’ claim was also disputed by observers, who pointed out that the intended target may have been (Islamist-leaning) ‘Prime Minister’ Omar Hasi, who is not recognised by the international community.

Some media outlets claimed he was in the hotel a short time before the attack – a claim which a Corinthia spokesman said was incorrect.

People on the scene said that between two and five terrorists wearing bullet proof vests stormed the hotel and were holed up in one of the top floors. Occasional gunfire was heard as security forces surrounded the complex.

The Associated Press quoted a Libyan security official as saying the gunmen had taken hostages.

The Corinthia spokesman said he was unaware of any hostages.

A civilian who witnessed the attack told the BBC: “I suddenly heard shooting and saw people running towards me, and we all escaped from the back [of the hotel] through the garage underground. The hotel did a lockdown after that.”

Other hotels were evacuated as a precaution.

IS CLAIMS RESPONSIBILITY, BUT OTHERS CAST DOUBTS
The tweet purportedly from IS called the attack The Raid of Abu Anas al-Libi, the suspected al Qaeda figure alleged to have helped plan the 1998 bombings of the U.S. embassies in Tanzania and Kenya. He died in hospital this month in New York ahead of his scheduled trial.

The media office of Libya Dawn, the ‘government’ which now controls Tripoli, accused pro-Dignity Operation loyalists of being behind the attack.

The Dignity Operation is allied to the internationally recognised government based in Tobruk.
Prime Minister Joseph Muscat in a tweet said the government was closely monitoring the situation.

Speaking later in Brussels, Dr Muscat said the government and the Security Service were gathering all intelligence about what had taken place but it would be irresponsible to draw conclusions. It was not known who the terrorists represented and who their message was addressed to.

“One should not rush into any conclusions,” he stressed.

Opposition leader Simon Busuttil also referred to the attack and reports that Maltese personnel and guests were safe. ‘Our thoughts and prayers are with them,’ he said.

The Corinthia is one of Tripoli’s top hotels and frequently hosts top diplomats and Libyan government officials.