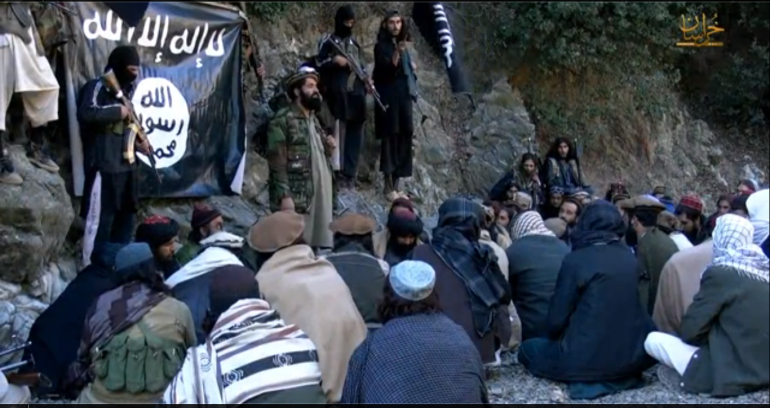 A month after the bulk of U.S. troops left Afghanistan, a homegrown militia has reportedly taken up arms against both fighters linked to the Islamic State group and Taliban insurgents in the north of the country. The militia announced Tuesday to Afghan news outlet Khaama Press that it was ready to fight the militants.
The group, named “Marg” (which means death in Dari, one of two official Afghan languages), claims to have already enlisted 5,000 fighters in Afghanistan’s northern Balkh province and identifies itself by wearing the colors of the Afghan flag: black, red and green.
Marg makes no distinction between fighting the militant group known as ISIS and the Afghanistan branch of the Taliban; it says they’re equally dangerous to Afghanistan. It also called on Afghans to “join their group for defense of their country and people,” Khaama Press reported.
The new militia was announced a day after ISIS spokesman Sheikh Abu Muhammad al-Adnani al-Shami released a statement declaring the expansion of the so-called caliphate to the Khorasan region, which includes Afghanistan. ISIS caliph Abu Bakr al-Baghdadi reportedly accepted this pledge of allegiance.
“Therefore, we call upon all the mujahideen in Khorasan to join the caravan of the khalifah [caliph] and abandon disunity and factionalism. So come to your state, oh mujahideen,” according to al-Adnani’s statement.
“Come to your khalifah, for you are the forerunners. You have fought the English, the Russians and the Americans, and upon you today is a new fight, a fight to enforce tawhīd [monotheism] and vanquish shirk [polytheism].”
ISIS’ Khorasan branch also released a video on Monday announcing the new leadership. Among the Afghan division are emir in the Khyber region Sheikh Kulzaman al-Fateh, emir of the eastern province Saad al-Emirati and northeastern emir Sheikh Mohsen.
ISIS members are dispersed in pockets around the country, concentrated in the southern and eastern provinces. Earlier this month Afghan officials confirmed ongoing fighting between the Taliban and ISIS and an increase in ISIS recruiting in certain areas.
“People who want to fight in Afghanistan just create new names — one day they are wearing white clothes (of the Taliban) and the next day they have black clothes and call themselves Daesh [an Arabic acronym for ISIS], but they are the same people,” Mohammad Akundzada, the governor of Nimroz province, told  CBS News.
Two Afghan officials confirmed to CBS News that a man named Mullah Abdul Rauf was actively recruiting fighters for ISIS but doubted the loyalties of those who expressed interest.
Rauf, who also goes by the name Abdul Rauf Aliza, was held at Guantanamo Bay for several years for his involvement in the Taliban. He was released in 2007 and joined up with the Islamic State of Afghanistan, a branch of the Taliban. After a falling out with the group, he reportedly joined ISIS, where he became a recruiter, according to the New York Times.
Source:  ibtimes