You are here: Home / Senza categoria / Erdogan and the spread of terror 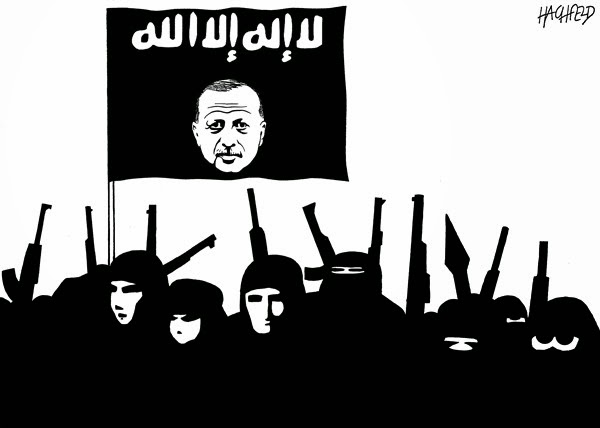 Turkey has sided with the Islamic State group, to the ire of Washington, but Erdogan may not be immune to terrorist attacks staged by takfiri militants

It had not been expected, that is true. But many, especially among the intelligentsia, were not all that surprised by Cumhuriyet’s decision to publish some images from Charlie Hebdo as a way of expressing solidarity with the French satirical magazine whose staff members were murdered by jihadists.

The government of the ruling Justice and Development Party (JDP) could not let the incident pass without comment. President Recep Tayyip Erdogan lashed out against the outspoken opposition newspaper. The Istanbul public prosecutor summoned two of its staff members, Ceyda Karan and her colleague Hikmet Çetinkaya, for questioning after pressing charges of incitement to hatred and animosity via the media and of insulting people’s religious values.

Saturday brought a development of a different order. About 500 demonstrators connected to a group calling itself the Fraternal Platform of the Prophet’s Companions rallied in the forecourt of the Fatih Mosque in the heart of historic Istanbul. Their purpose was to pray for Cherif and Said Kouachi, responsible for the massacre at Charlie Hebdo, and to chant slogans in support of Al-Qaeda.

As for Charlie Hebdo, they proclaimed: “The magazine has not died, but its fate is death!” Police blocked the demonstrators from staging a march around the historic mosque and participants soon disbanded.

The two contrasting scenes reflect the gulf in Turkish society that has expanded into a chasm under JDP rule. On one side of this chasm stands the religious conservatives and fundamentalists whose numbers are steadily growing, with the support and encouragement of JDP elites.

These JDP elites, in turn, have been harsh criticised by Turkey’s friends and allies. Two examples illustrate. The first is Italian Prime Minister Matteo Renzi’s objections to the presence of his Turkish counterpart, Ahmet Davutoglu, in the solidarity march against terrorism that took place in Paris the Sunday before last. Davutoglu’s participation did not come from the heart, Renzi said.

The second example came from former US ambassador to Ankara, Francis Ricciardone, who said, “Turkey and the US no longer share the same values.” Ricciardone was referring to the JDP government’s repression of freedoms and its cooperation with Daesh (the Islamic State) and other takfiri jihadists.

US State Department spokesperson Mary Harf was asked whether it was the case that Washington and Ankara no longer shared the same values. She refused to answer. Her silence spoke volumes: the US and Turkey are drifting apart.

The trend has its origins in mounting US and Western concerns over Ankara’s clampdowns on civil liberties and press freedoms and its increasing authoritarianism. Erdogan’s boundless thirst for power at home and regionally have driven him to increasing fanaticism in his campaign to bolster fundamentalism and Islamicise Turkish society and government.

According to Alon Ben-Meir, professor of international relations at New York University, Erdogan has promoted religious beliefs as prime criteria for key political and military appointments. At the same time, he has doubled the number of schools for training clergymen.

It could be that the Turkish president’s zealotry is fed, in part, by some wacky historiography. In November last year, Erdogan claimed that Muslims had discovered America in 1178 and that Christopher Columbus had mentioned seeing a mosque on a hill on the Cuban coast.

Be that as it may, there is little doubt that Turkish coffers have been open to radical Islamist fundamentalist groups. Perhaps the most telling evidence in this regard is in the recently leaked documents from the Turkish General Staff indicating that this government body supplied military support to Syrian opposition groups, including Al-Qaeda affiliate Al-Nusra Front.

It appears that convoys carrying truckloads of weapons and other military equipment rumbled across the Turkish border into northern Syria. The existence of this military supply line lends considerable weight to the belief that the Erdogan regime has close relations with terrorist groups in Syria and Iraq, Daesh in particular.

Presumably, this should have immunised Anatolia to jihadist terrorism. But as it turns out, the JDP’s Turkey has come into the terrorists’ crosshairs. Two weeks ago, Turkish security forces forestalled bombing attacks against two shopping centres in Istanbul.

Turkish authorities do not rule out the possibility of attacks similar to those that occurred in France, especially in view of the large number of Turks that have joined the ranks of Daesh. According to some estimates that government sources have not refuted, these are no less than 12,000.

Minister of Customs and Trade Nurettin Canikli stepped forward to reassure citizens. Turkey has the experience and knowhow to stop that kind of terrorism, he said, adding that the government had drawn up policies to confront it.

But then Teref newspaper revealed that security forces have unearthed terrorist plans to attack coastal areas during the summer season. Moreover, the attacks were to have been carried out by homegrown cells. According to the newspaper, a Turkish Daesh recruit who took fought in Syria returned home to Turkey to form a terrorist cell and coordinate with cells in the coastal area.

Why are these terrorist organisations turning against the government that boasts of its piety day and night? The answer could be that Ankara is backing away from them, and once again trying to curry favour with EU and the US. The pro-government Sabah newspaper reported on 6 January that Turkey and the US will sign a memorandum of understanding to train and equip 15,000 fighters from the Syrian opposition.

According to diplomatic sources cited by the newspaper, the programme will begin in March. Some 100 US officers will come to Turkey to support the training. Such a development would obviously incur the wrath of Daesh.