You are here: Home / West Asia / 44 militants killed in Afghan raids within day 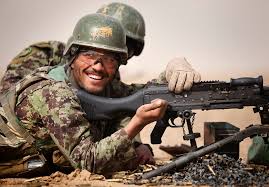 Some 44 militants have been killed amid cleanup operations conducted by Afghan security forces since early Saturday, the country’s Defense Ministry said on Sunday.

A total of 27 militants were wounded and one militant was arrested by Afghan army, police and intelligence agency personnel during the operations which were launched in Day Mirdad district of Wardak, Maiwand district of Kandahar, Sangin district of Helmand and Dand-e-Ghori district of Baghlan province respectively, the ministry said in a statement.

The statement also confirmed the loss of three army personnel over the same period.

Afghan security forces have pressed on clearing the militants in restive provinces.

The Taliban responds by bombing and armed attacks.

On Saturday, four security force members, including a district police chief, were killed after a roadside bomb struck a security force convoy in Sirkano district of eastern Kunar province.