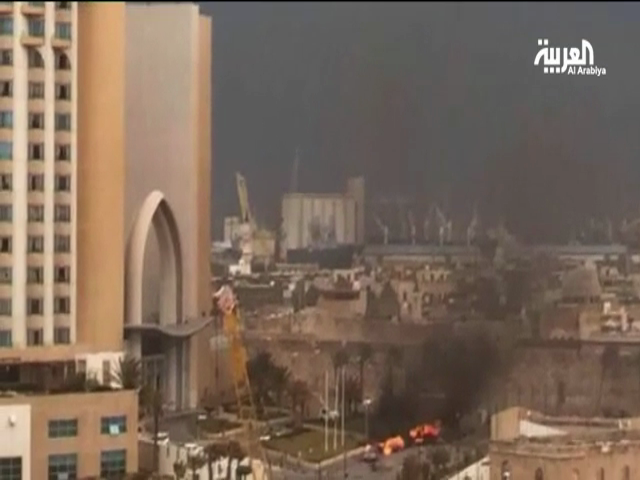 The only surviving five-star hotel in Libya’s capital Tripoli became a scene of carnage on Tuesday when it was stormed by gunmen who shot dead at least ten people. The victims included a US security expert and a Frenchman.

The Corinthian Hotel has become the effective headquarters of the rival Libyan government led by Omar Al-Hassi, appointed by the remnants of the old parliament, the General National Congress. Hassi represents the Libya Dawn rebels who have seized most of the western Libyan province of Tripolitania, which includes the capital.

The hotel was attacked by two young gunmen who first detonated a car bomb outside before shooting their way into the building, where on one of the top floors Hassi was having a meeting with aides.

The crime has been claimed by a group affiliated to the self-proclaimed Islamic State, which posted photographs of the two young terrorists on a social media site that is lined to it. These resembled pictures of the killers captured on the hotel’s CCTV system. Both attackers were eventually themselves killed.

Hassi and his people, however, are insisting that this was an attack of Hassi himself by Qaddafi loyalists sent by Khalifa Hafter. Gen, Hafter is the commander of forces of the government and parliament in Tobruk which alone are recognized by the international community.

Such an assertion is ridiculous. Leaving aside the credible IS claim of responsibility; self-sacrifice was never in the nature of supporters of the violent and grasping Qaddafi dictatorship. But there is a more serious consequence to the Hassi accusation.

The presence of IS is being felt ever-more widely in Tripoli. There have been killings and robberies and attacks on police and security directorates, which the Libya Dawn rebels have tried to blame on the government or Qaddafi loyalists. The general view is that the perpetrators are IS terrorists, spreading their influence through assassination and intimidation.

The mystery at the moment is the attitude of the key component of the Libya Dawn rebels, the Misratans. Their militias, many of which during the 2011 revolution, took part in the long and bitter Misratan street fighting against Qaddafi forces, have been doing Dawn’s military heavy lifting.

Misratan fighters have taken over a major southwestern oil field and launched a surprise attack on eastern oil terminals which appears to have been checked by government forces.

Misratan fighters were responsible for driving the government-loyalist Zintanis out of Tripoli. Instructively, a row between Dawn commanders caused Misrata to pull out their fighters from the west, at which point government forces made significant advances.

Misratans have since been talking to Zintanis about prisoner exchanges. Misratans have also joined the UNSMIL peace process in Geneva, even though Hassi and the GNC have refused to attend.

Misratans may have been worried about threatened UN financial sanctions. Given that their city has always been the commercial and business heart of Libya this is unsurprising. However, it seems very likely that Misratan leaders also see the rising deadly influence of IS in the Dawn rebellion and are recoiling from the terrorists’ bigotry and extremism.

In the end, the rebellion has been driven by a struggle for economic power. It is becoming increasingly evident that Libya Dawn has little chance of gaining control of Libya’s finances. That being the case, Misratans will be looking elsewhere for prosperity.