You are here: Home / MidEastGulf / 43 ISIS elements killed including Arabs in bombing targeted their meetings in Anbar 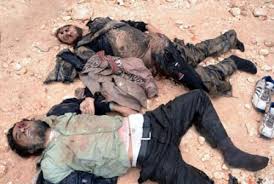 The Security Committee of Khalidiya District in Anbar province announced on Sunday, that about 43 ISIS elements were killed, including Arabs in a bombing targeted the organization’s meetings in Anbar.

Committee Chairman Ibrahim Fahdawi said in a press statement followed by IraqiNews.com, “The International coalition warplanes were able, today, to bomb a house in Joabh area east of Ramadi, which was taken by ISIS as headquarters for meetings; killing 43 elements of the organization, including Arab leaders.”

Fahdawi added that “the bombing was based on accurate intelligence.”

It is noteworthy that Anbar province is witnessing military operations to liberate the areas controlled by ISIS, while the Iraqi warplanes and the international coalition carry out air raids targeting the organization sites.