You are here: Home / Senza categoria / Southern Yemen moves towards secession as Houthis call for reconciliation 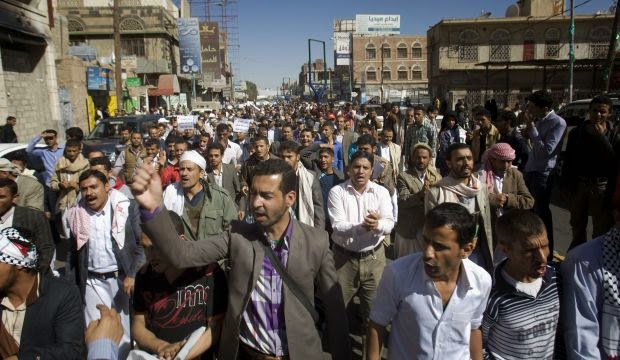 Yemen’s Southern Al-Hirak secessionist movement is poised to take further steps towards breaking away from the rest of the country and restoring the former state of South Yemen, according to political sources in the country.

This comes as the Shi’ite Houthi movement continued to tighten its grip on the political situation in the country and on the capital Sana’a, where it now holds President Abd Rabbuh Mansur Hadi and Prime Minister Khaled Bahah under virtual house arrest.

A number of provinces in the south and throughout the country have also declared “independence” from Sana’a in recent days, announcing they will no longer be receiving any instructions from the capital.

Southern political blocs in the Yemeni parliament, as well as those from the country’s Shura Council—the highest legislative body in the country—released a joint statement on Monday announcing they would be boycotting all sessions in parliament and the Shura Council in response to what they referred to as the Houthi “coup” in Sana’a, a city now “occupied” by the group, it said.

The statement said the signatories were holding the Houthi movement responsible for the lives and safety of Hadi, Bahah, and other officials they were holding.

On Monday night the group released Hadi’s chief of staff, Ahmed Bin Mubarak, whom they had been holding hostage for 11 days, following negotiations with the group conducted by the UN’s special adviser on Yemen, Jamal Benomar.

A source in Hadi’s office, who requested anonymity because they are not authorized to brief the media, told Asharq Al-Awsat that Bin Mubarak was handed to a local tribal leader in the Shabwah province upon his release by the group, who have now said he must leave the country.

Bin Mubarak, who is also head of the committee tasked with drafting Yemen’s new constitution, was abducted from the streets of Sana’a by the group while on his way to a meeting with Hadi regarding the new political framework.

Hadi was then placed under house arrest by the group, prompting him to tender his resignation as president.
But Faris Al-Saqqaf, one of Hadi’s former advisers, told Asharq Al-Awsat Hadi could renege on his decision, as he faced immense domestic, regional and international pressure to do so.

The leader of Yemen’s Houthis said on Tuesday his group was seeking a peaceful transfer of power after the resignation of President Hadi, and urged all factions to work together to solve the crisis.

Abdul Malik Al-Houthi’s conciliatory remarks in a televised speech came less than an hour after his supporters released Hadi’s chief of staff.

Political parties in Yemen, including the Houthis, are currently trying to agree what to do after Hadi’s resignation, which has left a power vacuum in a country which borders the world’s top oil exporter, Saudi Arabia.

In his speech, Houthi warned against allowing Yemen to be pushed to collapse and said that consultations were proceeding under United Nations auspices to resolve the country’s standoff.

“We are seeking a peaceful transfer of power on the basis of partnership,” Houthi said in a speech broadcast on the group’s Al-Maseerah television channel. “Let everyone go towards cooperation instead of clashing, arguing and wrestling.”

He added that resolutions made during nearly a year of national dialogue organized by Hadi in 2013 and an agreement signed after the Houthis captured Sana’a last September would also be the basis for any agreement.

Describing Hadi’s resignation as a “maneuver,” Houthi said political parties, with UN support, have been holding consultations to bring about a “peaceful transfer of power.”

In a statement, Benomar welcomed Bin Mubarak’s release, saying “this news would help reduce tensions and enable progress” in the negotiations he was facilitating between political parties.

Benomar said he urged Ansar Allah, the Houthis’ official name, to “undertake steps that would be in the best interest of all political sides and the people of Yemen”.

He also pressed all political parties to act responsibly and to give priority to the national interest, the statement said.

Meanwhile, in the southern port city of Aden—the capital of the former state of South Yemen—the Houthis continued their advance, with armed members of the group clashing with members of the Al-Hirak movement.

A military source in the city, speaking to Asharq Al-Awsat on condition of anonymity, said the Shi’ite group had now “imposed total control on the province of Aden.”

The province’s governor, Abdulaziz Bin Habtour, however, dismissed the Houthi presence in the region, claiming the Houthi “coup” would be short-lived and would be quashed by a popular uprising.

Speaking to TV news channel Sky News Arabia, Habtour said the Houthis would “not be able to run the affairs of the country because they are merely a small group that doesn’t even represent 10 percent of the country’s population, tribes or sects, and it is impossible for a small group such as this to impose its control over Yemen by force of arms alone.”