You are here: Home / Senza categoria / Hezbollah, Israel and the old deterrence equation 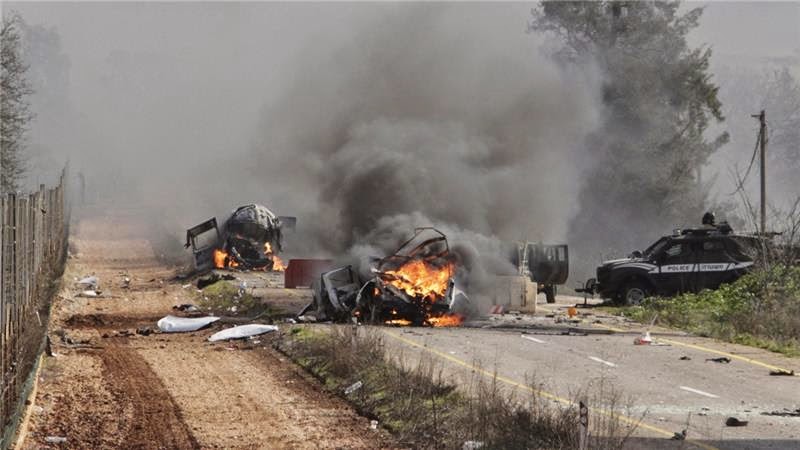 The latest flare-up between Hezbollah and Israel may be more serious than it looks. Wednesday’s attack against Israeli troops in the Shebaa Farms by the “Martyrs of Quneitra” unit is an explicit response to the Israeli attack on a convoy in the Golan Heights that killed senior Hezbollah members and an Iranian general.

However, the rules of engagement since 2006 may now be seriously frayed. Neither side wants war, the cost will be too high for both; however, such logic may not prevail.

The timing of the Israeli strike in the Golan may have been, as former head of the Israeli army’s Southern Command, Yoav Galant, said, related to the upcoming Israeli elections. Galant pointed out that the war in Gaza in November 2012, triggered by the killing of Hamas military leader Ahmad Jabari, was only two months before the last Israeli election.

“The timing of the assassination was not something that could only have been done on that date,” Galant said.
Israeli Prime Minister Benjamin Netanyahu does gain some national security credentials through the strike, outflanking his rivals on that score, but he is unlikely to risk war and its consequences with the powerful Hezbollah before an election.

Hezbollah had to retaliate in order not to appear impotent and to maintain its resistance image which has been heavily eroded by its support of Bashar al-Assad.

Fighting on two fronts
However, it also may not want to fight on two fronts. Indeed, Hizbollah has reassured Israel through UNIFIL that there is no interest in further escalation now that the latest attack evened the score. Therefore, on the surface, it would appear the deterrence will hold.

Despite these more rational considerations, there are other variables that may now tip the situation into high risk. First, the number and seniority of those killed in the Golan shakes the assumptions behind mutual deterrence that has existed since 2006.

Second, Israel may be looking for an opportunity to weaken Hezbollah while it is busy and drained fighting in Syria.

Some call this action by the callous term “mowing the lawn”, meaning, if one cannot defeat the enemy, one can at least weaken him every few years, keeping him from getting too high and strong. This applies to Hamas as much as to Hezbollah.

Third, and possibly most importantly, Israel and Iran are manoeuvring and sending signals in a year of a potential Iranian-American deal. Even without an agreement, a rapprochement, and the ensuing change of attitude by the US, will mean that Israel will have to live with a new geopolitical scenario where Iran, and therefore Hezbollah, will effectively be closer to the US.

Many Israelis do not believe this is in their interest, and one way of affecting that equation, without upsetting the whole apple cart, is to weaken the nearest threat to Israel in that equation, Hezbollah. It’s a message to the US as well as to Iran that Israel is still militarily strong and will not countenance the new arrangement without some reaction. Indeed, too often in the Middle East, diplomacy is conducted through the gun rather than the pen, or at the very least the geopolitical equation is affected by such actions.

Finally, Hezbollah may have some points to gain from fighting Israel in a limited fashion and somewhat regaining its resistance credentials.

Sticking with the old
In the very near term, the likelihood is that both Hezbollah and Israel will try to stand by the old deterrence equation; limited attack, counterstrike and the game is over until the next (limited) round. The nature of the Golan strike and the changing regional geopolitical climate is, however, changing the underlying attitudes.

The temptation to do more may now be stronger as both parties get nervous, and the attitudes that underlay deterrence are seriously shaken. Hezbollah is already under strong pressure in Syria; Israel may be looking for an opportunity to weaken it. There is therefore, the risk that despite rational calculations, escalation will happen over the coming months.

But there is also a risk that it will devastate Lebanese national infrastructure that, in its view, supports Hezbollah’s war effort. Such a war would be the summer Gaza war times 10, and there will be no real result at the end of the day. A short war would be a tragic convulsion possibly brought to an early stop by Iran and the US and their greater interests.

Hezbollah will have demonstrated Israeli vulnerability, Lebanon will be destroyed once again, and the darker energies of the Middle East will have once again been expended in the smaller and manipulated zones of conflict, such as Lebanon and Syria, partly in order to avoid an all-out regional war.

Once again, thousands will be killed, homes destroyed, many others traumatised in order to maintain an already malevolent status quo, or gain marginal advantage in the infinite game of the Middle East.