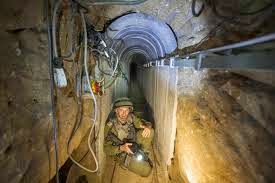 Israel believes Iran is now helping Hezbollah to build tunnels under the Lebanese border. The evidence is piling up and an effort is underway to find and breach one and examine it.

Since the 50 Day War with Hamas ended last August in Gaza Israel has been examining the massive amounts of evidence it collected in the 32 Hamas tunnels into Israel that were discovered and destroyed.

Comparing notes with the CIA and other Western intel agencies it was determined that these tunnels were of a new design probably supplied by Iran.

Apparently nearly $100 million of the aid Iran supplied to Hamas to help the Palestinians instead went into building these elaborate tunnels. Israel determined that each of these tunnels required 350 truckloads of construction material and were built to specifications similar those described by agent reports of such tunnels inside Iran.

This time the Israelis expect to have an easier time detecting them when the digging crosses the border. The first time around Iranian advisors have taught Hamas well how to keep the tunnel construction secret and even Israeli informants inside Gaza were not able to obtain many details.

The Israelis knew such tunnels existed but little else before the 50 Day War. This was apparently because of Iranian help in counterintelligence (defeating enemy espionage efforts).

Israel had their suspicions and that was one reason Israel sent troops (and intelligence specialists to collect evidence) in during July 2014.

The cross border tunnels can be a powerful weapon, if you can keep them secret. So far none of Israel’s enemies have been able to do that. But Hamas came close in Gaza and that shook up the Israelis quite a bit and both sides are making more efforts in this area.

Israel cannot afford to lose this battle, because undetected tunnels can be used to launch terror raids and, worse, kidnap Israelis and hold them for ransom.