You are here: Home / MidEastGulf / 42 dead in rebel-IS clashes near Damascus 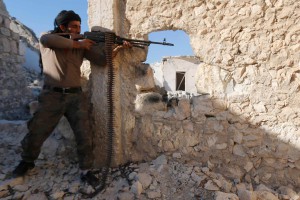 At least 42 fighters were killed in 24 hours of fierce fighting between rebels and the Islamic State group in Damascus province, a monitoring group said Wednesday.
“At least 30 Islamist rebels and 12 fighters from IS were killed in fighting since Tuesday” in the hilly region of Qalamun, the Syrian Observatory for Human Rights said.
Qalamun is divided into a western portion, which borders Lebanon and is mostly controlled by the regime and its ally, the Lebanese Shiite movement Hezbollah. The eastern sector has seen intense clashes between rebels and IS, and is strategic because it borders the “badiya,” the Syrian steppe. These plains are used by rebels to transport weapons from the Turkish border to the north and the Jordanian frontier in the south.
According to the Britain-based Observatory, IS has already cut off one of these routes and aims to take more to “suffocate” the rebels.  Meanwhile, at least 11 people were killed in regime bombardment of two towns in Damascus province.
“It is likely that there were even more killed in the attack, and the number will increase due to people in a critical condition,” said Observatory head Rami Abdel Rahman.
In the northern Aleppo province, 12 people were killed and at least 40 others injured in regime aerial attacks on Deir al-Hafir, a town under the control of IS militants.
“There are still people stuck in the buildings after they collapsed,” said Abdel Rahman.
Thirteen civilians, including nine children, were killed Tuesday night in shelling in the northwest province of Idlib, whose provincial capital was overrun by al-Qaeda’s Syrian affiliate and allied rebels.
Among them, a man and five children, three of them sisters, were killed in a regime air raid on Maarat al-Numan. Seven others, including a couple and their four children, were killed by rebel shelling on Jisr al-Shughur, one of the last regime-held cities in Idlib province.
Since they lost control of Idlib city, regime forces have been trying to chip away at opposition-controlled parts of the province to protect their supply route between Ariha and Jisr al-Shughur.
Meanwhile, Russian Foreign Minister Sergei Lavrov said Wednesday that the Islamic State group was Moscow’s greatest enemy, notwithstanding the strained relations with the United States over the Ukraine conflict.
“I believe IS is our greatest enemy right now,” Lavrov said in an interview with Russian radio stations when asked whether he considers China, IS or NATO Russia’s greatest threat.
Lavrov said “hundreds of Russian citizens, hundreds of Europeans, hundreds of Americans are fighting for IS, along with CIS (former Soviet) countries.”
“They are already returning home. They come here to rest after fighting and can get up to dirty tricks at home,” he said. “As far as (relations with the) United States are concerned, these are state issues, these are issues of the world order, which have to be resolved through talks.”
Russia’s relations with the West, particularly with the United States, have plummeted to a post-Cold War low over the war in Ukraine and sanctions imposed over Moscow’s role in supporting pro-Russian militants.