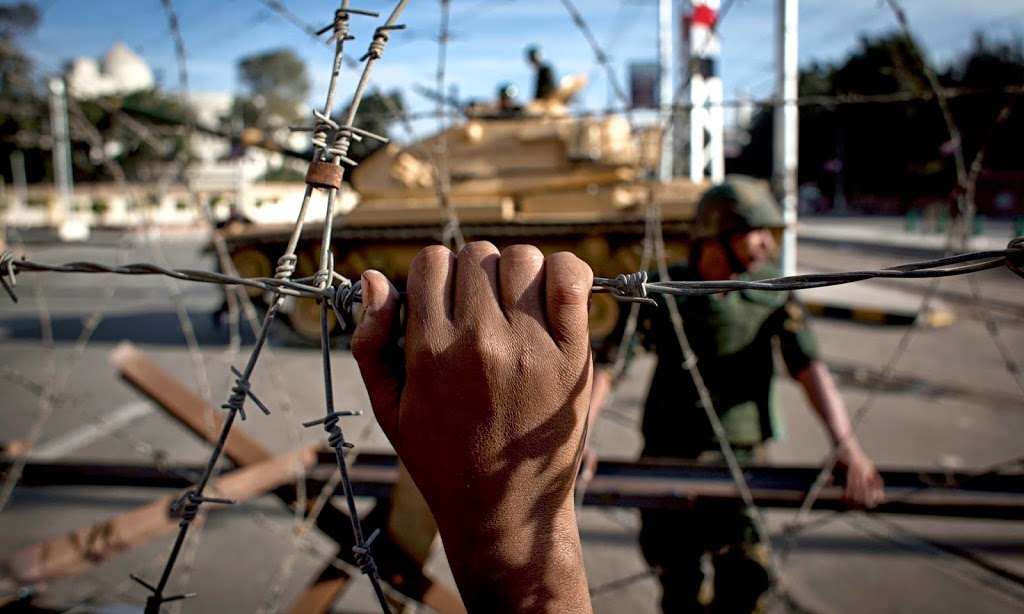 The Islamic State of Iraq and Syria (ISIS) group’s Egypt wing claimed a series of attacks that killed at least 27 security personnel on Thursday in some of the worst anti-government violence in months, after commemorations around the anniversary of the 2011 uprising turned deadly in the past week.

Egypt is fighting an Islamist insurgency based in the Sinai. Hundreds of security force members have been killed since the army ousted President Mohammed Mursi of the Muslim Brotherhood in July 2013 after mass protests against his rule.

The government makes no distinction between the Brotherhood and the Sinai-based militants. The Brotherhood denies any links to the insurgents.

The most active militant group in Sinai, Ansar Beit al-Maqdis, changed its name to Sinai Province last year when it swore allegiance to ISIS, the hardline militant group that has seized swathes of Iraq and Syria.

A series of tweets from the Sinai Province’s Twitter account claimed responsibility for each of the four attacks that took place in North Sinai province within hours of one another on Thursday night.

Thursday’s first attack was a bombing targeting a military headquarters, base and hotel in the capital of North Sinai province that killed 25 and wounded at least 58, including nine civilians, security and medical sources said.

The flagship government newspaper, al-Ahram, said its office in the city of al-Arish, which is situated opposite the military buildings, had been “completely destroyed,” although it was not clear if it had been a target.

Later, suspected militants killed an army major and wounded six others at a checkpoint in Rafah, while an assault on a checkpoint south of al-Arish wounded four soldiers, security sources said. A roadside bomb in Suez city, not in the Sinai, that killed a police officer was not claimed by ISIS.

After Sinai Province’s claim of responsibility, security sources said a suspected militant had been killed while attempting to plant a bomb at a power transformer in Port Said.

Sinai-based militants have killed hundreds of security officers since Mursi was removed from power following mass protests against his rule.

The military said in a statement on its Facebook page that the attacks were the result of a successful campaign to pressure the militants.

Sisi’s office said in a statement emailed on Friday morning that Sisi was heading back to Cairo to follow the situation.

Sisi had been scheduled to address the AU summit that began in Addis Ababa on Friday morning.

The US State Department condemned the attack, saying in a statement: “The United States remains steadfast in its support of the Egyptian government’s efforts to combat the threat of terrorism in Egypt as part of our continuing commitment to the strategic partnership between our two countries.”

Fragile recovery
The violence and civil unrest comes as Egypt is trying to burnish its image in the run-up to an investor’s summit in mid-March, to be followed by parliamentary elections.

The attacks in al-Arish and Rafah continue a pattern of unrest in the remote but strategic Sinai Peninsula, which borders the Gaza Strip, the Israeli-occupied territories and Egypt’s Suez Canal.

But the less common attempts in Port Said and Suez, at opposite ends of the Canal, bring the insurgency nearer to a key source of hard currency for the cash-strapped state.

Income from the canal has not been hurt by the turmoil following the 2011 uprising to the same extent as foreign investment and tourism, and a planned second canal is meant to boost the waterway’s value to Egypt.
However, Egypt’s attempts to attract investors for mega-projects, such as the second canal, that the government says are key to securing a nascent recovery could stall if instability increases.

The last major attacks in Egypt were on October 24, when militants killed at least 33 members of the security forces. That operation was also claimed by Sinai Province.

That prompted the government to declare a state of emergency in parts of Sinai, allow civilians to be tried in military courts, and close the only border not under Israeli control with Gaza.

Egyptian authorities have also decided to completely demolish the city of Rafah, in a bid to create a buffer zone between Egypt and Gaza.

Earlier in January, the authorities have officially began the second stage of evacuation of Rafah houses.
According to North Sinai district Governor Abdul Fattah Harhour, “it would be necessary to completely remove the city of Rafah in order to create a buffer zone on the borders with Gaza,” adding that the authorities began evacuating 1,220 homes, housing over 2,044 families, in the area demarcated for the establishment of the zone.

The displaced families will receive compensation for the values of their lost homes, but not for the lands upon which the homes were built.

In the first phase, more than 800 homes are being demolished and 1,100 families displaced to build the 500-meter wide, 13.5-kilometer long buffer zone.

Harhour said military engineering units in the area of Abu Shnar have started working on establishing a “new Rafah city,” with residential zones appropriate to the nature and traditions of the residents of Rafah.

The main part of the plan, aimed at blocking the southern borders with Gaza, is being implemented under the pretext of stemming jihadists reportedly infiltrating Egypt’s Sinai Peninsula from across the border through the Rafah crossing – Gaza’s only outlet to the outside world not under Israeli control.

Protest deaths
Tensions have risen across Egypt in the past week with protests, some of them violent, marking four years since the uprising that ousted dictator Hosni Mubarak from power.

Earlier on Thursday, a group of women protested in Cairo over the death of activist Shaimaa Sabbagh and around 25 others said to have been killed by security forces at rallies commemorating the 2011 uprising.

Sabbagh, 32, died on Saturday as riot police were breaking up a small, peaceful demonstration. Friends said she had been shot, and images of her bleeding body rippled out across social media, sparking outrage and condemnation.

“The Interior Ministry are thugs!” chanted about 100 female protesters at the site of Sabbagh’s death. Some held up signs with the word “murderer” scrawled over the face of Interior Minister Mohammed Ibrahim.

The protesters were defying a law that severely restricts protests. “People are here at incredible risk to themselves. But it’s a way of standing against the fear they have instilled,” said activist Yasmin el-Rifae.

Ibrahim has said an investigation into Sabbagh’s death will lead to prosecution if any member of the security forces is found responsible.

One of the organizers of Thursday’s demonstration said they had asked only women to attend because they feared infiltration by plainclothes male agents.

Across the street from the protesters, beside police officers, men stood making lewd gestures and yelling profanities. Others chanted in favor of Sisi.

Criticism is growing of the security tactics Sisi has used since Mursi was ousted.

A crackdown that began with the deaths of hundreds of Brotherhood supporters and the imprisonment of thousands more has expanded to include liberals and other activists.

Some of those now opposed to the government initially supported the protests that led to Mursi’s removal and Sisi’s rise to power, as people who knew Sabbagh said she had.

Moreover, scores of activists who revolted against Mubarak are being held in prison for holding unauthorized protests, while the April 6 Youth Movement that spearheaded the revolt has been banned by a court.

The revolt against Mubarak erupted on January 25, 2011, with hundreds of thousands of protesters taking to the streets across Egypt for 18 days until he stepped down.

The anti-Mubarak revolt was fueled by the police abuses and corruption that marked the strongman’s three-decade rule, but the police has since regained popularity amid widespread yearning for stability.

After his ouster Mubarak was detained and put on trial along with his security chiefs on charges of involvement in the deaths of protesters during the revolt.

Most of the charges have been dropped, bringing Mubarak closer to freedom. On the fourth anniversary of the January 25 revolt, his two sons Alaa and Gamal Mubarak walked out of prison pending a separate corruption retrial with their father.

“The Egyptian judiciary has shown a double-standard for justice by exonerating state officials from any guilt in committing human rights violations on the one hand; and on the other, by issuing hefty prison terms against those who exercise their civil and political rights,” the International Federation of Human Rights group said.

A lower court had jailed the Mubaraks in May 2014 for embezzling millions of dollars from state funds allocated for renovating presidential palaces.

But an appeals court overturned that verdict and ordered a retrial.

The military crackdown after Mursi’s ouster has killed more than 1,400 people, most of them within hours when police broke up two pro-Mursi camps in Cairo during the summer of 2013.

More than 15,000 Mursi supporters are also imprisoned, while dozens have been sentenced to death after speedy trials which the United Nations has denounced as “unprecedented in recent history.”

Sisi has repeatedly defended his regime, and soon after murder charges were dropped against Mubarak, he insisted that Egypt was “on a path to establish a modern democratic state based on justice, freedom, equality and renunciation of corruption.”