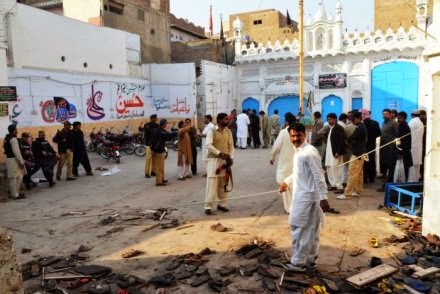 A bomb blast at a Shiite mosque in southern Pakistan has killed at least 40 people and wounded dozens more, officials said, in the deadliest sectarian attack to hit the country in more than a year.

The bomb exploded as worshippers attended Friday prayers in the town of Shikarpur in Sindh province, around 470 kilometres north of Karachi.

Pakistan has suffered a rising tide of sectarian violence in recent years, most of it perpetrated by hardline Sunni Muslim groups against minority Shiite Muslims, who make up around one in five of the population.
Earlier, a spokesman for Sindh police said “at least 15 people have been killed and 40 others wounded”.

Shaukat Ali Memon, the medical superintendent of Civil Hospital in Shikarpur gave a death toll of 20, but there was no confirmation of the higher figure.

Witness Zahid Noon said hundreds of people had rushed to the scene to try to dig out survivors trapped under the roof of the mosque, which collapsed in the blast.

Television footage of the aftermath showed chaotic rescue scenes as people piled the wounded into cars, motorbikes and rickshaws to take them for treatment.

“The area is scattered with blood and flesh and it smells of burnt meat, people are screaming at each other… it is chaos,” Mr Noon said.

“A huge contingency of police and rangers is present here and ambulances from the nearby towns have started to arrive.”

Abdul Quddus, a senior police official in Shikarpur, said the initial investigation suggested it may have been a suicide blast.

It is the bloodiest single sectarian attack in Pakistan since January 22 last year, when 24 Shiite pilgrims returning from Iran were killed when their bus was bombed in southwestern Baluchistan province.

Friday’s attack came as prime minister Nawaz Sharif visited Karachi, the capital of Sindh province, to discuss the law and order situation in the city.

Karachi, Pakistan’s biggest city and economic heartbeat, has wrestled for several years with a bloody wave of criminal, sectarian and politician murders.

Anti-Shiite attacks have been increasing in recent years in Karachi and also in the southwestern city of Quetta, the northwestern area of Parachinar and the far northeastern town of Gilgit.

Around 1,000 Shiites have been killed in the past two years in Pakistan, a heavy toll, with many of the attacks claimed by the hardline Sunni group Lashkar-e-Jhangvi (LeJ).

Pakistan has stepped up its fight against militants in the past month, following a Taliban massacre at a school in the northwestern city of Peshawar.

Heavily armed gunmen went from room to room at the army-run school murdering 150 people, most of them children, in an attack that horrified the world.

Since then the government has ended a six-year moratorium on executions in terror-related cases and pledged to crack down on all militant groups.