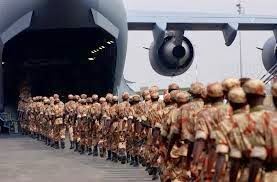 The head of the African Union’s Peace and Security Council, Samil Chergui, said on Saturday the move came after the council urged heads of state to endorse the deployment of troops from five West African countries to fight the terror group.

African leaders who are members of the 54-nation African Union are meeting in the Ethiopian capital Addis Ababa for a two-day summit that ends on Saturday. UN Secretary General Ban Ki Moon earlier said he support the AU’s move to send a force to fight Boko Haram.

Boko Haram is increasing its attacks as Nigeria prepares for February 14 elections. Thousands have been killed in the 5-year insurgency.