You are here: Home / MidEastGulf / 400 ISIS fighters killed recently in outskirts of Mosul 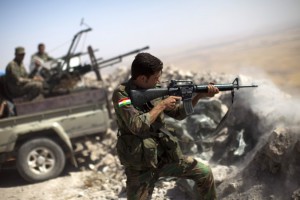 On Saturday, Kurdistan Democratic Party in Nineveh Province announced, that 400 fighters of the Islamic State in Iraqi and Syria (ISIS) were killed in the outskirts of Mosul during the past few days, while pointed out that Peshmerga forces become stronger and has the ability to liberate any area.”

The Kurdistan Democratic Party’s Spokesman in Mosul Saeed Mamouzini said in a statement followed by IraqiNews.com, “ISIS terrorist gangs attack the Peshmerga forces in the outskirts of Mosul from time to time, but they are not able to control the land,” noting that, “400 ISIS fighters were killed during the last few days.”

“ISIS in Mosul suffered a major collapse in its ranks that led its leaders to execute dozens of ISIS members who retreated from the combat axes,” Mamouzini continued.