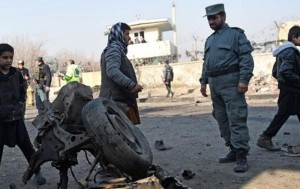 At least four bombers were killed after they were blown up by own explosives in western Herat province of Afghanistan, it has been reported.

The Ministry of Interior (MoI) said the four bombers were looking to carry out a coordinated attack using a truck packed with explosives in Herat province.

A statement by MoI said the terrorists were on their way towards Shindand province to execute the attack when the truck packed with explosives went off in Zer-e-Koh area.

The statement further added that the explosion did not incur any casualties to the civilians or members of the security forces and only four terrorists were killed.

No group including the Taliban militants has so far claimed responsibility behind the incident.

Herat is among the relatively volatile provinces in western Afghanistan where anti-government armed militants are actively operating in a number of its remote districts.

This comes as the insurgency activities by the anti-government armed militant groups have been rampant during the recent months across the country including capital Kabul.

The Taliban group has carried out two suicide attacks in the capital within the past one week, leaving at least three people dead and scores of others wounded.

At least two civilians were killed and 18 others were wounded in the latest attack on a resturant in Kabul city on Friday evening.