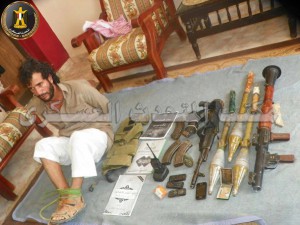 The Egyptian armed forces have killed four “terrorists” and arrested another in restive North Sinai amid a military campaign against militants following a series of attacks against security outputs, said military spokesperson Mohamed Samir Tuesday in a statement.

The four terrorists were killed when military forces destroyed their truck while attempting to escape in Al-lifitat area of al-Sheikh Zuwayed city, Samir added.

The forces also arrested a militant, Eid Salem, at a military checkpoint; he was driving a truck loaded with weapons, according to Samir.

On July 1, the attacks targeted 15 military and security checkpoints, killed 17 personnel and more than 100 militants were killed in subsequent clashes.  Islamic State (IS) affiliate in Egypt, Sinai Province, has claimed responsibility for the attacks.

Since then, 241 terrorists have been killed; four “fugitive terrorists” and 29 suspects have been arrested, and 26 trucks used in militant attacks have been destroyed, Samir said Monday