You are here: Home / Africa / 4 people killed in anti-French forces protest in Mali 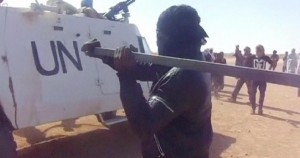 Four people were killed and seven others were injured when shots were fired at a demonstration against French and UN forces in northern Mali’s Kidal town Monday, local national assembly representative and eyewitnesses said.

Mohamed Ag Intalla, who represents Kidal at the national assembly, confirmed the casualties to Anadolu Agency and added that out of the seven injured, there were two serious cases who were later evacuated to Kidal Hospital.

Earlier, a member of the UN Mission in Mali, also known as MINUSMA, told Anadolu Agency that at least one civilian had been killed in the incident.

Dozens of protesters had stormed the Kidal airport Monday morning where they broke and ransacked equipment. Eyewitnesses told Anadolu Agency that the protesters had been demonstrating against alleged arbitrary arrests made by French and UN forces before it turned deadly.

An eyewitness also said that UN soldiers had fired warning shots during the protest; however, MINUSMA did not, so far, take any responsibility for the dead and injured among the protesters.

The UN mission in Mali only said in an earlier statement that it was “in touch with Malian authorities and leaders of local communities, as well as those of civil society, in order to ease tensions and to understand the circumstances of the events.”

In 2013, French military intervened in Mali on the pretext of driving out extremist militants from the country’s cities and towns in the north.