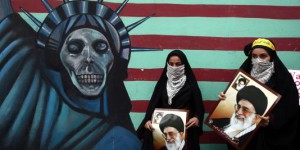 Iranians rallied Wednesday marking the 36th anniversary of taking over the U.S. embassy by a group of Iranian students in Tehran.

Demonstrators gathered in front of the former U.S. embassy in the center of Tehran, now called the “Den of Espionage.”

Carrying flags and banners denouncing the United States and Israel, they vowed to follow the example of the Islamic Revolution’s late founder, Ayatollah Ruhollah Khomeini, who supported the takeover in 1980.

The United States severed diplomatic relations with Iran on April 7, 1980, following the embassy takeover and capture of 60 U.S. diplomats in 1979, 52 of whom remained in captivity for 444 days during the hostage crisis.

The Iranian judiciary official said that the United States “violates its minorities’ human rights” and should therefore be prosecuted for this.

A resolution issued toward the gathering’s end called on Iranian officials to beware of the U.S. influence upon its return to the country.