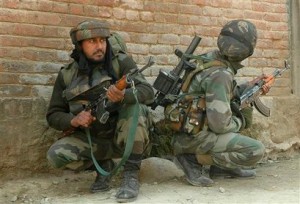 Four militants and an Indian military trooper were killed Thursday in a fierce gunfight in restive Indian-controlled Kashmir, officials said.

The gunfight broke out at Vilgam in Handwara of frontier Kupwara district, about 85 km northwest of Srinagar city, the summer capital of Indian-controlled Kashmir.

The gunfight triggered in the area Wednesday evening and lasted until Thursday morning.

Military and police officials said they launched the operation on specific intelligence inputs about presence of militants in the area.

A police spokesman based in Srinagar told Xinhua bodies of slain militants were yet to be recovered.

“Search operation is going on and we have not recovered the bodies of militants so far,” the spokesman said.

This was the second gunfight in less than 24 hours in the region.

An Indian military trooper and a militant were killed, while as another trooper wounded in gunfight on Wednesday at Ladoora- Rafiabad in Baramulla district.

According to police the slain militant was affiliated with Lashkar-e-Islam a breakaway group of Hizbul Mujahideen, responsible for attacks on mobile phone communication network.

A guerilla war is going on between militants and Indian troops stationed in Indian-controlled Kashmir since 1989. The gunfight between the two sides takes place intermittently across the region.