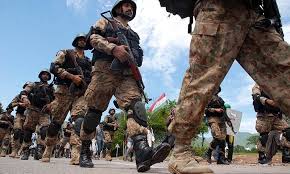 At least four militants were killed and 37 suspects arrested over the last 24 hours in Pakistan as the law enforcement agencies speeded up the ongoing combing operation ahead of the Muslim festival of Eid, local media and officials said Saturday.

Inter-Services Public Relations, the mouthpiece of Pakistani army, said in a statement that the troops launched an operation in Rajanpur area of the country’s east Punjab province on Saturday.

Four militants and a soldier was killed in the gun battle which was triggered-off by the search operation, conducted by the forces at the militants’hideouts.

The forces have also recovered arms and ammunitions from the hideouts. Separately, in the country’s southern port city of Karachi, three militants were arrested as police foiled a terrorist attack to sabotage the forthcoming Eid celebrations.

The arrested suspects were shifted to some undisclosed location for investigations, said the report.

The combing operations are being carried out across the country by security forces under the national action plan (NAP) to pre-empt potential sleeper cells and hideouts of terrorists.