You are here: Home / Mediterranean / 4 Libya oilfields close as strike grips 5th over Islamic State fears
IS manages to make advances despite hopes that new unity government will be able to establish its authority in the country 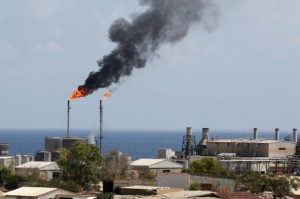 Four Libyan oilfields have closed and employees in a fifth are striking over fears of attacks from the Islamic State group, a military source and media said on Monday.

“Four oilfields were evacuated in the oil basin in Merada”, 800 kilometres southeast of the capital Tripoli, the military source said.

The Bayda, Tibisti, Samah and Waha oilfields were evacuated on Saturday, according to the LANA news agency close to the Tobruk-based government in the country’s east.

The evacuation came after “the collapse of security and low daily production rate due to difficult security conditions,” said the source, who is part of a brigade protecting the oilfields that is loyal to the recognised parliament.

On 2 April , two members of the Merada brigade were killed and two others went missing after IS members launched an attack on the Bayda and Tibisti oilfields, a brigade member told AFP.

Merada is located around 350 kilometres from the coastal city of Sirte where IS has established a stronghold and from where the group has sought to extend its influence to control Libya’s oilfields and facilities.

Meanwhile, employees at the Zaltan oilfield 55 kilometres southeast of Merada announced “a general strike following the worsening of the security situation inside the field and fears of attacks from IS”, LANA said.

The employees said they were “forming a crisis committee and stopping production activities” at the oilfield.

In early January, IS launched an offensive to seize oil terminals in Ras Lanuf and Al-Sidra along the coast.

Libya has been in chaos since the 2011 uprising that ousted longtime dictator Moamer Gaddafi, with IS taking advantage of the turmoil to gain ground in the oil-rich country.

It has had two rival administrations since mid-2014 when a militia alliance overran Tripoli, setting up its own authority and forcing the recognised parliament to flee to the remote east.

Neither have ceded power to a UN-backed unity government seeking to establish itself in Tripoli.