You are here: Home / Africa / 4 killed, 12 injured in twin blasts in Mogadishu 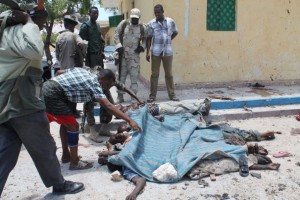 At least four people were killed and 12 others injured in twin explosions at a restaurant in the Somali capital of Mogadishu on Saturday evening, officials and witnesses confirmed on Sunday, like reported by xinhuanet.com.

A security officer told Xinhua that some unknown assailants hurled two grenades at the eatery at Hodan district in Banadir region.

“Four people were killed and 12 others were injured in the explosions at a restaurant in Hodan district. Among the injured are some government officials,” said the security officer who did want to be identified.

The busy restaurant is frequented by government officials. Witnesses said many people were at the restaurant at the time of the attack.

The twin explosions were very powerful that could be heard in parts of the capital, said a witness named Hussein Osman.

Mogadishu has recently experienced a series of attacks from insurgents.The Somalia Islamist group of Al-Shabaab, which is fighting to topple the government, claimed responsibility for the latest attack, saying it killed four government soldiers in the attack.