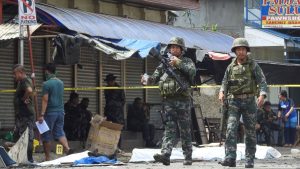 They were killed during a raid at around midnight on a house where they were staying inside a gated community in Don Bosco district in Paranaque city, just an hour’s drive from the capital.

One of the men fired at the policemen and tried to lob a grenade that went off prematurely.

An officer was injured when his legs were hit by shrapnel.

“Not even Covid-19 could deter or prevent (them) and their cohorts from planning and looking for the opportune time to strike and kill.”

Intelligence sources cited by the online news site Rappler said all four were likely a sleeper cell sent to Metro Manila by Abu Sayyaf chieftain Hatib Sawadjaan, described in previous reports as the “acting emir” in the Philippines of ISIS.

Rappler said Sawari was a “group finance and logistics facilitator”.

She received remittances from Indonesian terrorist Yoga Fabrianto, who was arrested in Sabah, Malaysia, last year, it said.

Rappler said the money was meant to finance the deadly attack in January last year on a Roman Catholic cathedral on Jolo island in the Muslim province of Jolo.

Sawari’s husband, Sali, had purportedly been working as a security guard at a condominium, also in Paranaque. The two other suspects were security guards as well.

Sawadjaan, 60, and his small but brutal faction in the Abu Sayyaf group reportedly plotted the attack on the Jolo cathedral.

At least 23 people were killed and over 100 injured in the attack.

Military reports said an Indonesian couple blew themselves up minutes apart, one inside and the other outside, the cathedral.

Pro-ISIS militants are said to be fanning out well beyond their enclaves in southern Philippines to tap into dense urban areas and far-flung towns and villages where they can move around unencumbered by a military drive bent on eradicating them.

Sawadjaan is the father-in-law of Malaysian militant Amin Baco.

Baco, who has had lengthy experience fighting a guerrilla war in Sulu, was once rumoured to have been designated as ISIS’ “emir” in South-east Asia, replacing Isnilon Hapilon, the Abu Sayyaf chieftain killed in the five-month siege in 2017 of the southern city of Marawi.