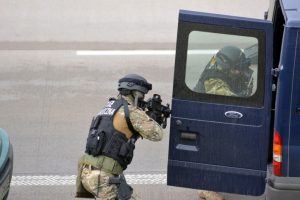 Four Tajikistan citizens have been detained in Poland on May 7 and accused of recruiting Islamists to commit terrorist acts for ISIS in Europe, according the spokesman of the minister coordinator of special services, Stanisław Żaryn, according to rmx.news.

Polish Internal Security Agency (ABW) and Polish Border Guard were involved in the arrests, Żaryn adding that all actions taken against the foreigners were in accordance with Poland’s anti-terrorist actions bill.

“The foreigners were detained in a guarded Polish Border Guard center and will be deported and added to a list of undesired persons on Polish territory and the Schengen zone,” he stated.

The spokesman emphasized that according to the intelligence gathered by the Internal Security Agency (ABW), the detainees sympathized with and supported the actions of the so-called Islamic State.

The Lebanese citizen’s aim was to create networks within EU countries meant to conduct terrorist attacks in Western European states.

Back then, Żaryn stated that the man had possessed family ties with people within ISIS who were fighting coalition forces in Syria and Iraq.

While staying in Poland, the Lebanese man was meant to use the internet to communicate with Islamic State structures and other persons associated with it in EU states. He was also meant to financially support ISIS members in Syria.

The Lebanese man was detained in a guarded facility for foreigners in Białystok in north-east Poland.