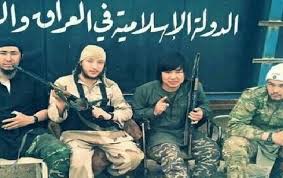 A source in Anbar Operations Command announced on Wednesday, that the security forces killed four members of ISIS that were Chinese nationals during cleansing battles of Karmat al-Fallujah.

The source, who asked not to be identified, added: “ISIS elements are trying to fill the shortfall in their criminal cells by foreign fighters from China, Japan, Chechnya, the Caucasus and the Arab countries.”