You are here: Home / Mediterranean / 4 Egyptians killed in Libya 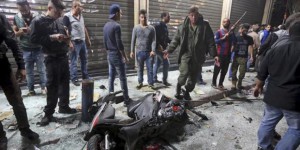 Two Egyptian nationals were killed by airstrikes in Libya’s town Ajdabiya, announced the Ministry of Foreign Affairs in a Thursday statement; two others have been reportedly killed after going missing, the Coptic Church announced.

On Thursday, Ahmed Mahgoub and Maged Hassan were reportedly killed when their workshop was shelled. The full statement, published on Al-Masry al-Youm newspaper, has not clarified the source of the airstrikes. Attempts by The Cairo Post to reach the Foreign Ministry’s spokesperson for comments were not successful.

The Egyptian embassy in Libya, despite closed due to security turmoil, is still following up on nationals’ affairs remotely from Egypt. From its Egyptian makeshift office, the embassy ensured coordination with the Libyan side to transfer the bodies of the two Egyptians when military operations going on in the area end.

In its statement, the ministry called on all Egyptian nationals who are still in Libya to stay away from the danger spots for their own safety.

In a separate incident, the Orthodox Church announced that two Coptic Egyptians were killed in Libya after they gone “missing” for a week, reported Youm7. The church said it received the bodies of the two brothers: Wasfi Bakheet, 37 yr and Fahmy Bakheet, 27 yr. The victims were working in the field of construction and were originally from Upper Egypt’s governorate of Sohag.

Thousands of Egyptians began fleeing the war-torn Libya in February, after the Islamic State group beheaded 20 Egyptian Copts on video in the Libyan coastal city of Sirte. Since the execution video, Cairo warned Egyptians against traveling to Libya and urged nationals to return back.

In August, Egyptian authorities announced that some 67, 530 have arrived from the North African country, many of them came via the Sallum crossing border, while others arrived via air. Hundreds of Egyptians, however, are being arrested on a near-daily basis trying to cross the border to Libya, in search of a better life either in the oil-rich country, or through traveling to European countries via the Mediterranean.

Libya has suffered from security unrest since its 2011 uprising, with Islamist militants controlling large swathes of the west of the country, while the internationally recognized Libyan government was established in the east.