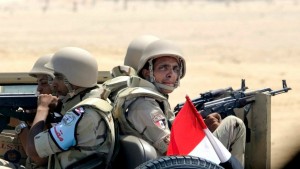 Four Egyptian army soldiers were killed in the country’s restive North Sinai province during military operations against militants, the military spokesman said in a statement on Sunday.

According to the statement, six militants were killed during the ongoing clashes while three weapons and explosives caches were destroyed.

Twelve roadside bombs ready to detonate against security forces on highways were discharged, it added.

Egypt has been witnessing a growing wave of attacks by militants, based mainly in North Sinai, since the army-led ouster of Islamist leader Mohamed Morsi in 2013.

The attacks have killed hundreds of police and army men, with a Sinai-based Islamic State affiliate group claiming responsibility for most of them.

The Armed Forces in coordination with the police have lately intensified wide-scale operations to uproot the militants’ hideouts, killing nearly 100 jihadists on Oct. 15, in retaliation to the killing of 20 soldiers in the same day.

According to Ahram Online, the IED, which was planted next to the entrance of a bridge in the city, detonated as an armored police vehicle passed through the area.

Last week, Egypt’s military launched a new campaign to fight Islamist militants in North Sinai, killing over 50 in response to a militant attack two weeks ago that killed 12 soldiers and injured six others.