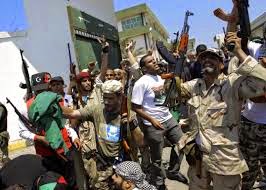 The attack by five armed men at the Corinthia Hotel in Tripoli on Tuesday was a game-changer for Libya and a milestone in its post-revolutionary narrative that was perhaps always going to be passed.

Militia violence has dogged the country’s progress since Gaddafi’s death in October 2011, while the tangle of competing parochial interest groups and international alliances has gradually shaken itself into two rival blocs.
Neither of these blocs has a vision for the future – only a frequently repeated mantra of who and what they oppose. The internationally recognised government, exiled in the east, believes itself to be waging war on terrorism by fighting the militia alliance known as Libya Dawn, commanded nominally from Tripoli.
The Tripoli government is similarly convinced that in fighting the militias collectively known as Libyan Dignity it is combating remnants of Gaddafi’s regime in continuation of the February 17 Revolution.
In the background, Libya’s ungovernable expanse has largely run itself. It is frequently said that Libya’s disunity has often been its greatest friend as well as its greatest enemy – imparting a degree of stability that has thus far prevented all-out civil war. But the nucleus of religious extremism present in eastern Libya since the 1990s, increasing levels of internet literacy among Libya’s youth and the consistent failure of successive administrations to provide jobs, growth and security have all meant that the uptake of Islamic State-inspired dogma may well have been an ultimate inevitability.

That it hasn’t shown itself before is only down to the nature of the Tripolitanian, who abhors the extremist lifestyle, preferring instead to don the latest fashion, order cappuccini, and admire the sea view.

Perhaps unsurprisingly therefore, at least some of the five men who drove their weapons-laden car into the Corinthia’s car park at 9.30 on Tuesday morning were not Libyan – a Tunisian and a Sudanese among them. But Libya has not been invaded by IS elements from outside.

The young men who attacked the Corinthia hotel were undoubtedly IS-inspired, but they did not sweep into Libya on the back of Toyotas wearing balaclavas, like their counterparts in northern Iraq.

Several North African nationalities have diasporas in Libya and these communities’ youth are just as unemployed and disillusioned as Libyans their age, with the added dejection of being foreigners in a country they likely grew up in.

These young men’s Twitter feeds and Facebook pages are the roads along which IS has invaded Libya. The weapons and expertise necessary to execute an operation of this complexity are already here – legacies of a revolution fought by young men with improvised weaponry and guerrilla tactics.

The only component missing up until now has been the intent to target and harm unarmed civilians in large numbers – this was the threshold crossed on Tuesday morning.

A tweet posted in the opening moments of the attack by the ‘Islamic State of Libya’ justified the attack as an act of revenge for the death of Abu Anas Al Libi, the alleged al-Qaeda militant snatched by US Special Forces from the streets of Tripoli in October 2013 – he died in US custody in New York on January 2, apparently from advanced liver cancer.

In their pursuit of revenge against America, the men shot and wounded guests on the hotel steps before entering the building and calling a lift to take them to the upper floors, where the hotel’s few remaining guests were located.

A remote or a timer then exploded a pre-positioned car in front of the hotel, summoning local militia forces to the scene, though by this time, they were chasing the attackers up stairwells.

A dozen employees and guests were corralled high in the hotel. The hours-long hostage ordeal ended with four of the attackers blowing themselves up using a combination of suicide vests and hand grenades.

Another was detained. Most of the hostage group was safely released, but nine of their colleagues had been killed – some in the crossfire, others in cold blood.

Libya Dawn has already attempted to paint the incident as an attack on the city’s peace orchestrated by Gaddafi loyalists within the internationally recognised government, a narrative that has taken hold among some sectors of Libyan society.

But the weaponry, the degree of preparation and the appetite for inflicting casualties exhibited in this attack all point toward Islamic extremist violence becoming a greater feature of Libya’s security environment in the near future.