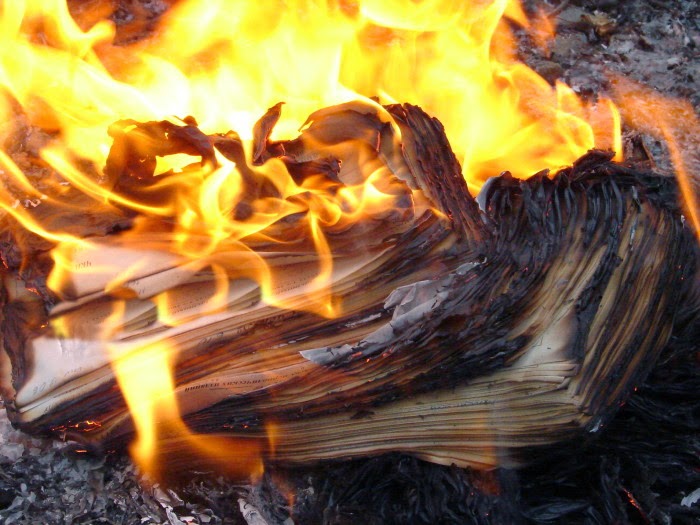 When Islamic State group militants invaded the Central Library of Mosul earlier this month, they were on a mission to destroy a familiar enemy: other people’s ideas.

Residents say the extremists smashed the locks that had protected the biggest repository of learning in the northern Iraq town, and loaded around 2,000 books — including children’s stories, poetry, philosophy and tomes on sports, health, culture and science — into six pickup trucks. They left only Islamic texts.

“These books promote infidelity and call for disobeying Allah. So they will be burned,” a bearded militant in traditional Afghani two-piece clothing told residents, according to one man living nearby who spoke to The Associated Press. The man, who spoke on condition of anonymity because he feared retaliation, said the Islamic State group official made his impromptu address as others stuffed books into empty flour bags.

Since the Islamic State group seized a third of Iraq and neighbouring Syria, they have sought to purge society of everything that doesn’t conform to their violent interpretation of Islam. They already have destroyed many archaeological relics, deeming them pagan, and even Islamic sites considered idolatrous. Increasingly books are in the firing line.

Mosul, the biggest city in the Islamic State group’s self-declared caliphate, boasts a relatively educated, diverse population that seeks to preserve its heritage sites and libraries. In the chaos that followed the U.S.-led invasion of 2003 that toppled Saddam Hussein, residents near the Central Library hid some of its centuries-old manuscripts in their own homes to prevent their theft or destruction by looters.

But this time, the Islamic State group has made the penalty for such actions death. Presumed destroyed are the Central Library’s collection of Iraqi newspapers dating to the early 20th century, maps and books from the Ottoman Empire and book collections contributed by around 100 of Mosul’s establishment families.

Days after the Central Library’s ransacking, militants broke into University of Mosul’s library. They made a bonfire out of hundreds of books on science and culture, destroying them in front of students.

A University of Mosul history professor, who spoke on condition he not be named because of his fear of the Islamic State group, said the extremists started wrecking the collections of other public libraries last month. He reported particularly heavy damage to the archives of a Sunni Muslim library, the library of the 265-year-old Latin Church and Monastery of the Dominican Fathers and the Mosul Museum Library with works dating back to 5000 BC.

Citing reports by the locals who live near these libraries, the professor added that the militants used to come during the night and carry the materials in refrigerated trucks with Syria-registered license plates. The fate of these old materials is still unknown, though the professor suggested some could be sold on the black market. In September, Iraqi and Syrian officials told the AP that the militants profited from the sale of ancient artifacts.

The professor said Islamic State group militants appeared determined to “change the face of this city … by erasing its iconic buildings and history.”

Since routing government forces and seizing Mosul last summer, the Islamic State group has destroyed dozens of historic sites, including the centuries-old Islamic mosque shrines of the prophets Seth, Jirjis and Jonah.

Al-Zamili, who leads the parliament’s Security and Defence Committee, compared the Islamic State group to raiding medieval Mongols, who in 1258 ransacked Baghdad. Libraries’ ancient collections of works on history, medicine and astronomy were dumped into the Tigris River, purportedly turning the waters black from running ink.

“The only difference is that the Mongols threw the books in the Tigris River, while now Daesh is burning them,” he said, using an Arabic acronym for the Islamic State group. “Different method, but same mentality.”