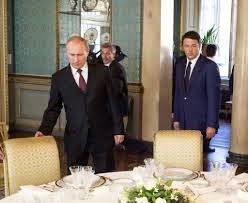 Renzi will meet Putin on Thursday morning for discussions that will also include Russia’s exit from Ukraine following a ceasefire last month.

Renzi last week appealed for international help over the situation in Libya amid threats from Isis extremists, who have threatened to use the north African country as a springboard for attacks in Europe.

Although Italy has been pushing its allies to take a more proactive approach to the situation, Renzi has ruled out intervention in the short-term.

“The important thing is to get the message across that the UN must play a role in the Libya situation, and Russia is a permanent member [of the UN Security Council],” he said last week.

Italy had long enjoyed good relations with Russia, mostly cemented when Silvio Berlusconi was leader, until the Russian-Ukraine conflict and is considered by some as only a moderate supporter of the sanctions against Russia.

This will be Renzi’s first visit to the Kremlin since becoming premier in February last year. The pair last met in Milan in October, at a summit of European and Asian leaders (Asem).

Also Egypt’s President Abdel-Fattah El-Sisi is scheduled to meet on Monday with a Russian security delegation headed by Secretary of the Security Council of Russia Nikolai Patrushev.

The visit by the head of the Kremlin’s Security Council comes less than a month following a two-day visit by Russian President Vladimir Putin to Cairo.

The talks will also include strategic, security and political aspects of mutual interest between the two countries.

During Putin’s visit in February, he signed an agreement with El-Sisi to construct a nuclear-power plant to generate electricity in Egypt.