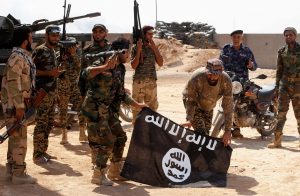 The Iraqi Security Media Cell said in a statement that the anti-terrorist forces clashed for more than 10 hours with an armed group of ISIS elements in Khanukah mountains, confirming that the operation had resulted in the death of 39 militants, including leaders of the organisation, especially the so-called the ‘legal mufti ‘and the ‘military official’ of ISIS.

Iraqi forces carried out several landing operations to eliminate these elements, noting that two tunnels were found in the area, the first being a weapons depot that includes large quantities and numbers of weapons and ammunition, while the second is used as a ‘money bureau’ with equipment, documents and computers related to financial transactions of ISIS members and the entities that they deal with, according to the statement.

The statement confirmed that the two tunnels were destroyed with all their contents after the air support by the international coalition aircraft bombed the place, pointing out that four Iraqi forces were wounded in the operation.

In December 2017, Iraqi authorities announced the liberation of the entire territory of the country from ISIS grip after about three and a half years of confrontations with the organisation that occupied about a third of the country, but intermittent confrontations between the two sides are still continuing, especially in the northern regions.