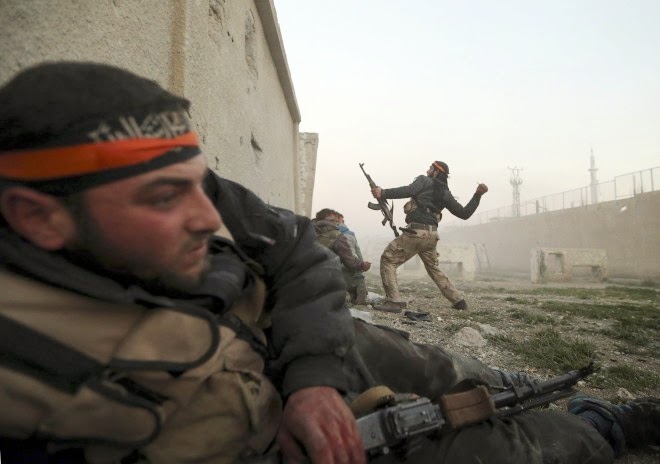 The Al-Nusra Front and Free Syrian Army militants started their heavy clashes in the Western parts of the Aleppo countryside on Thursday morning.
The Al-Nusra Front is trying hard to get rid of the non-Takfiri terrorists such as FSA.
Also in the past 24 hours, the Syrian army continued its offensive operations against the armed groups in nearby areas of Deir Ezzur province, claiming the lives of scores of Takfiri militants.
The Syrian troops stormed the hideouts of the rebels in the areas of al-Jafra, al-Mrei’iyeh, al-Bouomar, al-Maryaiye, al-Rushdiye, and al-Sina’a in Deir Ezzur province, killing and injuring scores of them.
Elsewhere, the militants suffered major losses in al-Qastal al-Tahtani, Aydoun, al-Latamina and Hamadi Omar in the countryside of the central province of Hama, as the army made more gains in the province.
Meantime, foreign-backed militants sustained a heavy toll on the outskirts of Damascus province, as the Syrian army gained more ground in its fight against the armed groups.
The army troops raided the strongholds of the rebels in Qalamoun area, killing and injuring a large number of them.
Also, a large number of the Takfiri insurgents were killed in Tal Brak in Hasaka, when the army intensified its offensive on the area.
Meantime, 226 gunmen, who were involved in the current events, surrendered to Syrian authorities in Idlib, Hama, Homs and Aleppo on Saturday, to be pardoned.
The latest months have witnessed a surge in the number of wanted people and gunmen who turned themselves in to the authorities in various areas across the country.
The majority of them were released after authorities pardoned them.
Kurdish fighters managed to liberate a village from ISIL Takfiri terrorists on the outskirts of Syria’s Northern town of Kobani.
The so-called Syrian Observatory for Human Rights said on Saturday that Kurdish fighters from the People’s Protection Units (YPG) captured the village as they battled to increase their control in the area.
The Kurdish forces are currently in control of 17 of the hundreds of villages that had fallen into the hands of ISIL in the Kobani area. Some of the villages have no more than a few houses.
Most of the villages have been recaptured since Kurdish fighters seized the strategic town on the border with Turkey on January 26, after more than 100 days of fierce fighting with ISIL.
However, the ISIL terrorists are still scattered throughout the countryside around Kobani’s Southeast and Southwest.
In a Friday statement, the YPG announced that it liberated “several regions” in the West of the town, adding that it captured several military vehicles, as well as arms and ammunition from ISIL.
The loss of the border town is viewed as a major blow to the Takfiri terrorists, which started advancing on the town on September 16, 2014, in order to strengthen control over a long stretch of the Syrian-Turkish border.
The battle for Kobani has claimed the lives of more than 1,600 people, most of them from ISIL.
Some 200,000 people escaped to Turkey from Kobani and the adjacent villages due to the clashes over the past few months and now most of them cannot return because of the scope of destruction.
At least 3,710 ISIL terrorists were killed in the Syrian border town of Kobani after more than four months of fighting.
Top Syrian Kurdish military commanders announced in a new report on Saturday that the ISIL terrorists suffered major losses during the four-month-long fighting, adding that the Kurdish offensives on the Takfiri group left more than 3,710 terrorists dead and 102 of their vehicles destroyed.
The report added that also 16 tanks belonging to the group were targeted during the clashes.
Kurdish fighters expelled ISIL terrorists from Kobani after more than four months of fighting.
YPG fighters have “expelled all Islamic State (of Iraq and the Levant) fighters from Kobani and have full control of the town”, Rami Abdel Rahman, director of the London-based Syrian Observatory for Human Rights, said last week.
The Kurds are chasing some terrorists on the Eastern outskirts of Kobani, “but there is no more fighting inside now”, Rahman said.
Then the Kurdish fighters announced that they would continue to fight to expel the ISIL terrorists from neighboring areas of the city.
In a statement of the People Protection Units, Kurds said that “Kobani war was crucial for ISIL mercenaries” and that “ISIL defeat in Kobani signifies the beginning of the end of ISIL mercenaries”.
Source: Fars