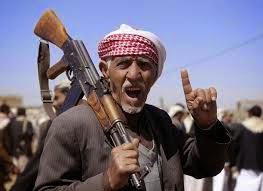 A senior Yemeni politician says Shiite rebels in control of the capital, Sanaa, are demanding their militia becomes part of the country’s army and police as a precondition for talks on releasing nation’s president and Cabinet members from house arrest.

The development is the latest in the power grab by the rebel Houthis who also control all major government buildings in Sanaa and several key military facilities.

Abdullah Noaman said on Monday that his Nasserite Party pulled out of UN-brokered talks the day before, after the Houthis demanded that their 20,000-strong militia join the country’s military and security forces as a precondition to any kind of deal.

The Houthis gave Yemeni political factions on Sunday a three-day ultimatum to reach an agreement, otherwise they said they’ll take over themselves.

Meanwhile, at least 10 people have been killed in Yemen over the past four days in attacks led by an al Qaeda’s affiliate against Shi’ite Houthi fighters and the Yemeni army, local officials and the group said.

Yemen has been in limbo since its president and prime minister resigned less than two weeks ago after the Houthis seized the presidential palace and confined the head of state to his residence in a struggle to tighten control over Yemen.

Local officials in the city confirmed the death of the commander without giving further details.

The militants targeted Yemeni soldiers on Saturday and said it had killed two at a checkpoint in the southern city of Abyan and wounded two others, according to a post on its Twitter account.

Local officials in the region said that clashes between the army and the militants had also led to the death of at least three Ansar Al-Sharia members.

The group also said on Twitter it shot an army officer in the southern province of Lahj on Friday and killed three other Houthi fighters in the central province of Al-Bayda on Thursday.