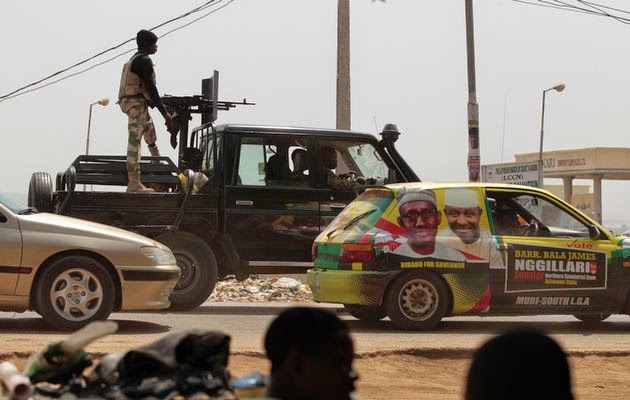 Nigeria’s military on Sunday repelled a Boko Haram assault on the key city of Maiduguri as violence raged across the country’s northeast just two weeks before national elections.

The hours-long attack on the strategic capital of Borno state was the Islamists’ second attempt to take Maiduguri in a week.  As government forces were holding them off, the airforce of neighbouring Chad was pounding the militants’ positions in Gamboru, a town on Nigeria’s border with Cameroon 140 kilometres (87 miles) to the northeast.

With near-relentless violence plaguing much of the northeast, and Boko Haram still in control of large swathes of the region, fears are mounting over the prospect of organising polls on February 14.

The opposition All Progressives Congress (APC), which claims to be gaining momentum in the campaign against President Goodluck Jonathan, has rejected calls for the vote to be postponed.

But hundreds of thousands of voters in the northeast, an APC stronghold, could be disenfranchised by the unrest if the election goes ahead in two weeks.

Heavily-armed gunmen attacked the southern edge of Maiduguri at about 3:00 am (0200 GMT), setting off explosives as they tried to enter the city, several residents said.

Repelled in the south by troops backed by vigilantes, they regrouped and tried to take the city from the east, where they again met stiff resistance.

As the gunbattles raged, “the whole city (was) in fear“, said resident Adam Krenuwa.

Defence ministry spokesman Chris Olukolade said the assault on the town, where the extremist group was founded more than a decade ago, was “contained” and that “the terrorists incurred massive casualties“.
“The situation is calm as mopping up operation in the affected area is ongoing,” he wrote in a text message, a claim consistent with witness reports.

Despite being under fire in recent months, Maiduguri has become a place of refuge for people forced to flee other areas in Borno that have been taken over by the Islamist rebels.

In other attacks in the northeast Sunday, a suicide bomber killed seven people in Potiskum, the economic capital of Yobe state, while two blasts killed five people in Gombe city to the south.

The bomber in Potiskum blew himself up shortly after midday outside the home of Sabo Garbu, who is running for a seat in the lower house of parliament on behalf of the ruling People’s Democratic Party (PDP).
Seven people died in the blast and seven were wounded, a police officer at the scene who requested anonymity said in an account supported by three witnesses.

Garbu and those attending his campaign meeting reportedly escaped unhurt.

It was not immediately clear if the attack was the work of Boko Haram.  The Islamist militant group, fighting to create a hardline Islamic state, has carried out dozens of bombings throughout its six-year uprising, which has claimed more than 13,000 lives.

Fearing the collapse of government control in areas controlled by the Islamists along their borders, Nigeria’s neighbours have rallied to the fight against Boko Haram.

On Sunday, Chadian fighter jets went into action against Boko Haram in the town of Gamboru for a second day running, an AFP journalist witnessed.

Loud explosions were heard coming from the town while local and Chadian troops and armoured vehicles massed across the border in the Cameroonian town of Fotokol, pointing to a possible imminent ground operation.

“We are determined to fight the enemy,” Chadian commander General Ahmat Darry Bazine said in front of national television cameras after the bombing raid.

“The morale (of the troops) is very high,” he said, sitting among his men in the bush.

A Chadian officer told AFP the air strikes sought to pave the way for Gamboru “to be liberated“.

Election officials have insisted Nigeria’s vote will go ahead on February 14, but concede that voting will be impossible across much of the northeast.

Foreign observers have said that they will not even attempt to monitor polling in the region because of the unrest.

Jonathan, who is facing a stiff challenge from former military ruler Muhammadu Buhari, has repeatedly tried to assure Nigerians that Boko Haram could be contained.

But those promises have consistently proved hollow, with the violence having escalated each year under his watch and his management of the crisis being fiercely criticised, including during the presidential campaign.

The APC’s Buhari, a former army general who briefly led the country in the mid-1980s, has told voters that he will be able to curb the bloodshed but has so far not released a specific plan to deal with Boko Haram.