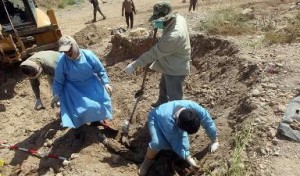 The troops found the mass graves in al-Asri district in the town of Baiji, the northern central province of Salahudin, Xinhua cited froim a military statement statement.

Baiji is some 200 km north of Iraqi capital of Baghdad.

The statement did not say how long the bodies have been buried or how they were all identified as IS militants.

On Tuesday, a Salahudin provincial security source said troops drove out IS militants from Baiji after days of fierce battles. This came after the earlier capture of Iraq’s largest oil refinery near Baiji and the town of Seiniyah, some 10 km west of Baiji.

The battles in Salahudin province are part of the second phase of major offensive announced earlier by Iraqi Prime Minister Haider al-Abadi, aimed at freeing towns seized by the IS group since June 2014 in the northern part of Salahudin province.

Salahudin, a predominantly Sunni province with its capital of Tikrit, some 170 km north of the Iraqi capital of Baghdad, is the hometown of former president Saddam Hussein.