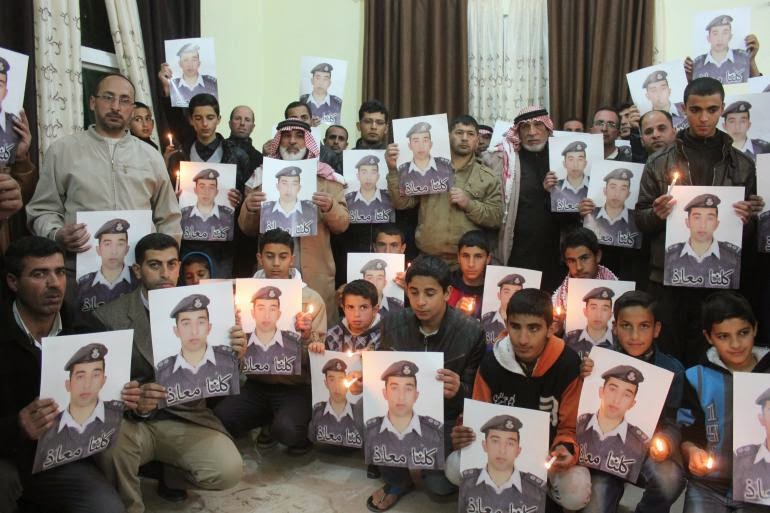 The Jordanian government has vowed ‘revenge’ and ‘punishment’ for the brutal killing of its pilot, air force Lt. Mu’ath Safi al-Kaseasbeh, by the Islamic State group, the Associated Press reported.

Several media reports quoted anonymous Jordanian officials as saying Jordan planned on speeding up the execution of  Sajida al-Rishawi — a failed suicide-bomber whose release ISIS had demanded in a previous video in exchange for Japanese hostage Kenji Goto — in retribution for Kaseasbeh’s death.

Al-Rishawi is an alleged attempted suicide bomber who is thought to have taken part in bombings in Amman in November 2005. She survived when her explosive belt failed to detonate.

She was sentenced to death by a Jordanian court in September 2006. She is currently appealing the sentence. Jordan also has in its custody four other Islamist terrorists, and their fate is unclear.

Stills from the video were widely circulated on ISIS-affiliated Twitter accounts. International Business Times has chosen not to display the video, whose authenticity could not be verified independently.  The Jordanian government confirmed his death and said he had been killed Jan. 3, before ISIS demanded a prisoner exchange for his release.

In a December edition of its Dabiq online magazine, ISIS released the first images and the first interview with the Jordanian military pilot. The group said it shot down the pilot’s plane, but both U.S. and Jordanian officials denied that claim.

ISIS listed several demands it wanted Jordan to meet in exchange for the release of the pilot. The Sunni militant group said it wanted Jordan to stop fighting with the U.S.-led coalition and release several prisoners in exchange for the pilot, regional media reported Sunday. It was the first time ISIS demanded a member of the U.S.-led coalition drop out of the fight.

Jordan has just resumed executions after an eight-year moratorium. In December, it executed 11 people, according to Death Penalty Worldwide, an online database run by Cornell University Law School. Jordan authorities did not give a reason for lifting the moratorium begun in 2006.

According to the database, as of February 2013, there were at least 106 individuals on death row in Jordan. Executions are carried out by hanging. Terrorism-related offenses are among crimes punishable by death alongside murder, rape, robbery and drug trafficking among others.