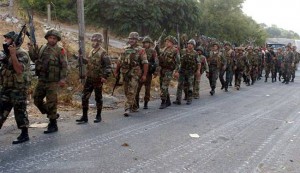 Pro-government forces repelled an attack on a key Syrian airport during a fierce battle in which they lost 20 fighters but killed almost as many militants, activists said to AFP.

“There was an attack on the outskirts of the Khalkhalah military airport in Sweida province on Friday,” said Rami Abdel Rahman, the head of the Syrian Observatory for Human Rights.

The army has been able to maintain control over the airport and its surrounding areas despite losing 20 fighters. At least 15 militants were killed.

Although the Observatory was awaiting confirmation on the identity of the attackers, Abdel Rahman told AFP they were likely to have been jihadis from ISIS.

Khalkhalah airport lies along a major highway that links the government-held provincial capital of Sweida to Damascus.

“The area is important because it’s Druze and borders Damascus province,” Abdel Rahman told AFP, referring to the minority sect that considers Sweida its stronghold.

“The red lines that had been in place about attacking these areas have been broken.”

Attacks on minority communities have increased with the rise of ISIS, which regularly target such sects in Syria, as well as Sunnis who it alleges have violated its interpretation of Islam.

On March 25, Syrian rebels and Islamist fighters seized control of the town of Bosra al-Sham, which is south of Sweida but located along the same highway as Khalkhalah airport.

Also on Friday, Al-Qaeda’s Syrian affiliate withdrew from a key area along Syria’s border with Jordan, the Observatory said.

Rebel groups and the Nusra Front seized control of the Nasib crossing in the southern province of Daraa from the Syrian Army last month.

Nasib had been under attack by rebel forces, but fell shortly after Al-Nusra joined the ongoing offensive.

The jihadis, along with the other rebels, held the checkpoint, the duty-free zone between the two crossings, and the customs area.

Nusra withdrew from the checkpoint last week and left the other areas Friday.

“The other fighters asked them to leave Nasib because they weren’t in the fight to begin with,” Abdel Rahman said.

To the north, at least three people were killed and dozens wounded in rocket attacks Saturday on a Christian neighbourhood of Aleppo city.

“The death toll will likely rise as there are a number of people in critical condition,” Abdel Rahman said.