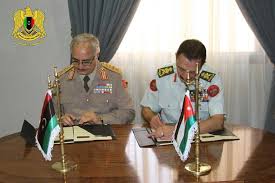 The first group of aircraft engineers to be sent to the Royal Jordanian Air Academy graduated on Wednesday after a 26-month-long training course.

According to a member of the Libyan embassy in Amman, the 34 students were sent by the Libyan Defence Ministry in August 2013 for training on jet fighter maintenance. They had initially enrolled at the Misrata Aviation Academy in late 2009 academic year, he added, but their studies interrupted by the revolution in 2011.

The 34 engineers soon would join the Defence Ministry “to operate and maintain the country’s fighters,” another diplomat added.

In the past two years, military personnel have been sent abroad for training to a number of countries including Italy, Turkey, Egypt, Russia, France and the UK, although in the case of the latter, it ended badly with the British ending up sending them home.

Some sent fro training in Jordan also were involved in riots and brawls but Jordan has been looking to expand the military relationship. Just over three weeks ago, Khalifa Hafter, the commander general of the Libyan armed forces, on his second visit to Amman this year, signed a military cooperation MOU with the Jordanians that includes training.