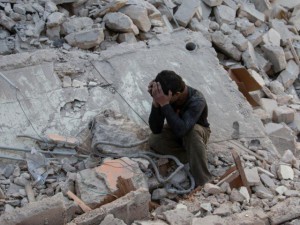 Rebel rocket fire killed at least 34 civilians in Aleppo in one of the bloodiest days of the conflict for government-held areas of Syria’s second city, a monitoring group said today.

Twelve children were among the dead as Islamist rebel factions pounded western neighbourhoods of the city with more than 300 rockets on Monday, the Syrian Observatory for Human Right said.

Control of the city is divided between rebels in the east, and forces loyal to President Bashar al-Assad in the west.

Both sides frequently bombard each other but Observatory director Rami Abdel Rahman told AFP that Monday’s deaths marked “one of the highest tolls in opposition attacks in Aleppo city”.

“The number of deaths is likely to rise, as there are roughly 190 people wounded, including dozens in critical condition with serious wounds,” he said.

“With dead and wounded combined, it adds up to the most violent day for government-controlled parts of Aleppo city in the whole war.”

Last year, de Mistura proposed a “freeze” on fighting in Aleppo as a first step towards local ceasefires across Syria.

But the rebels rejected the proposal and the government has continued to pound rebel-held areas of the city with deadly air strikes.

The conflict began with anti-government demonstrations in March 2011 but has evolved into a multi-front war that has left more than 230,000 people dead.