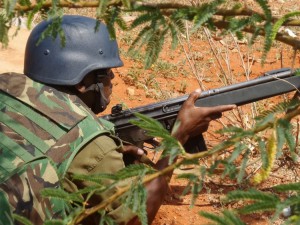 Kenyan troops killed 34 al Shabaab militants in two separate incidents on Saturday and Sunday in Somalia and two of its own soldiers were killed in an ambush, the military spokesman said.

On Saturday, the Kenya Defence Forces (KDF) killed 21 of the insurgents in the southern town of Afmadow in the ambush in which the two soldiers died.

“The KDF soldiers pursued them following information of an intended probe attack. Following the incident, a middle level al Shabaab commander has been detained, 13 militants were killed,” Obonyo said, referring to a reconnoitre attack by al Shabaab.

“Regrettably, KDF suffered two fatalities and five injuries. The injured were evacuated and are receiving medical attention,” he said of the incident on Saturday. An improvised explosive device also damaged one of the Kenyan army’s vehicles, he said.

Somalia’s government is battling to rebuild the Horn of Africa nation after more than two decades of conflict. Al Shabaab ruled large parts of Somalia until 2011, when it was driven out of Mogadishu by African Union (AU) and Somali troops.

The militants, who aim to topple the Western-backed government, often inflate casualty numbers and downplay the number of their own fighters killed.

In January, Kenyan troops as part of the AU mission in Somalia (AMISOM) took heavy losses when al Shabaab launched a dawn raid on their camp in El Adde near the Kenyan border. No exact casualty figure has been given.

Al Shabaab said more than 100 soldiers were killed. The government has not formally released the number of casualties Kenya suffered in the assault.