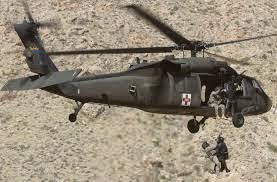 The Pentagon sent additional Black Hawk helicopters this week to Erbil in northern Iraq to reduce the time needed to rescue pilots who may go down conducting airstrikes against the Islamic State in Iraq and Syria, Defense Department officials said Thursday.

The move followed a demand from a crucial Arab ally that the United States place more effective search and rescue teams in northern Iraq, closer to the battleground, instead of basing aircraft for such missions much farther south in Kuwait.
The United Arab Emirates suspended combat missions in late December, citing fear for the safety of its pilots after a Jordanian pilot was captured — and later burned to death by militants — after his F-16 went down in northern Syria.
American military officials said that Islamic State fighters captured the Jordanian pilot, First Lt. Moaz al-Kasasbeh, within minutes after his plane went down, and said that search teams did not even have time to locate him before he was captured.
A senior military official said that Lieutenant Kasasbeh’s parachute had been spotted quickly by the militants and that he had landed right in their midst.
But his capture raised questions about whether rescue teams would have been able to get to Lieutenant Kasasbeh within the so-called golden hour, after which chances of survival from a crash or injury drop sharply.
When United Arab Emirates officials discovered that most of the rescue teams and aircraft were based in Kuwait, they said that their pilots would not fly until there was a system in place for more rapid search and rescue.
Two days ago, the United States Central Command notified the United Arab Emirates officials that they had sent additional rescue helicopters to Erbil, Defense Department officials said. It was unclear Thursday morning whether the addition of the Black Hawk helicopters would be enough to restart Emirati combat missions.
The rescue teams and aircraft — or lack thereof — would apply as well to the recovery of American pilots, who have continued to fly combat missions over Iraq and Syria.
A senior administration official said that American officials have been trying to navigate around objections by the Iraqi government to the deploying in Erbil of American helicopters and V-22 Osprey tilt-rotor aircraft, which take off and land like helicopters but fly like planes.
The Iraqi government has expressed concerns that placing sophisticated American weaponry in Erbil, the capital of Iraqi Kurdistan, could embolden the Kurds’ ambitions for independence from Iraq.
Even after the United Arab Emirates suspended combat missions, the Central Command continued to issue news releases saying otherwise.
As recently as Wednesday, the military task force in Iraq that reports to Central Command put out a news release about airstrikes in Syria and Iraq on Jan. 27 and 28. “Coalition nations conducting airstrikes in Syria include the U.S., Bahrain, Jordan, Saudi Arabia, and the United Arab Emirates,” the release said.
A Central Command spokesman, asked about the discrepancy, said Wednesday night that “unless there’s a formal declaration, we leave it as it is.”